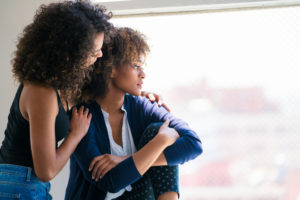 According to the study, police kill more than 300 black Americans each year. At least a quarter of those killed are unarmed.

The study gathered data from the 2013-2015 Behavioral Risk Factor Surveillance System (BRFSS). The BRFSS is a population study involving interviews covering a wide range of health risk factors. For example, one question asked people how many days in the past month their mental health was “not good.”

103,710 black Americans participated in the interviews. Among these people, 38,993 were exposed to one or more police killings in their home state.

Black Americans exposed to nearby police shootings reported more “not good” mental health days. The study estimates that, on average, police killings account for an extra 1.7 days of poor mental health per year. The largest effects on mental health occurred within two months of exposure.

The chronic stress of trauma, discrimination, and poor mental health can have serious physical health consequences. Research suggests black women exposed to police violence are more likely to develop severe health issues. Erica Garner, who became a police reform activist after her father was killed by police, died of a heart attack in 2017 at the age of 27.

Therapy can help people cope with painful social realities and the vicarious trauma of exposure to violence.