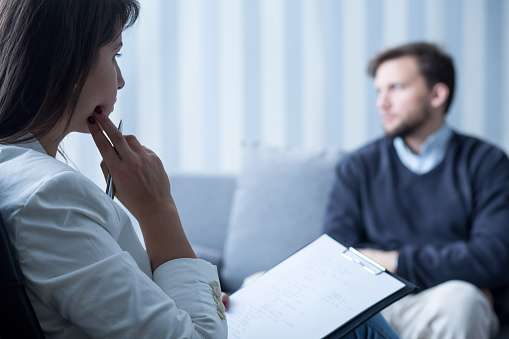 If you want to tug at your therapist’s heartstrings, ask a simple question: What is my diagnosis? This basic yet reasonable inquiry may set into motion some old, rusty gears and wheels that may not have turned lately within your practitioner. The question is the “where do babies come from?” question for mental health workers. Too early into treatment and the therapist might not want you to know the details of their process for conceptualizing your struggles. Too late and the therapist might have forgotten the relevance. The concept of diagnosis itself is not entirely perverse, but it does have a checkered history in mental health treatment that has at least as much to do with politics as science.

Who is asking about the diagnosis is important, of course, but the environment the question is being asked in also makes an enormous difference. In 1972, David Rosenhan and seven colleagues acted as “pseudo-patients” entering 12 different psychiatric hospitals across five states. Their sole reported symptom was hearing unfamiliar but same-sex voices saying “empty,” “hollow,” and “thud.” This existentially themed symptom was not related to any specific diagnosis at the time, but nevertheless, seven of the eight were diagnosed with schizophrenia (the other with manic depression). Once admitted to the psychiatric hospital, the “pseudo-patients” acted normally aside from pseudonyms used and professional backgrounds kept hidden. The individuals stayed an average of 19 days inpatient (seven to 52 days variation) and were given a total of approximately 2,100 pills of psychotropic medication (which they secretly did not take).

The groundbreaking study, titled On Being Sane in Insane Places, was published in 1973. It came on the heels of controversy over homosexuality being listed as a Diagnostic and Statistical Manual (DSM)-recognized disorder. Citizens of the United States were losing faith in the American Psychiatric Association (APA), and Rosenhan’s “pseudo-patients” were shedding light on the lack of both validity and reliability in diagnostic methods. The author’s fundamental question was, “Do the salient characteristics that lead to diagnoses reside in the patients themselves or in the environments and contexts in which observers find them?” (Rosenhan, 1973). Rosenhan didn’t pull any punches in stating, “Psychological categorization of mental illness is useless at best and downright harmful, misleading, and pejorative at worst.”

For Rosenhan, diagnoses provided by the DSM are unreliable—because as his study showed, it is remarkably easy to feign a condition within the psychiatric institution. However, his statements go beyond reliability. Rosenhan says these so-called disorders are learned through training and reside “in the minds of the observers and are not valid summaries of characteristics displayed by the observed” (Rosenhan, 1973). What he meant was that clinicians see the people they treat through a lens and this lens obscures the person’s presentation.

The environment compounds this obscurity by setting up a dynamic whereby the person is primed to fit into categories learned by the clinician. A present-day example would be someone seeking out treatment at an “addiction” or “rehab” center. The clinicians are trained and cued into habitual patterns related to substance use and impairments, which is their viewfinder within the treatment process. This framework imposes on the individuals who walk through the door. With robust changes made in the DSM-5 that lower the threshold of a substance-use disorder (i.e., two symptoms for “mild” use disorder), it is unlikely an individual who has used substances will leave an assessment without a diagnosis.

If you personally decide to inquire about your diagnosis, be prepared for some therapist backpedaling and even perspiration. You might even find out you do not have a diagnosis. If you pay cash to a therapist and there is no third-party payer (health insurance, Medicare, etc.), many therapists do not make a diagnosis. Your therapist might say it is complicated and deflect the question. Some might not particularly care about a diagnosis because it does not inform or drive what they do. A typical response might be a diagnosis is necessary for insurance reimbursement purposes.

Be wary of a dismissive response to your question, because the process is important. The diagnosis is both an effect and reflection of how the therapist sees you. This lens is present whether the therapist is aware of it or not. It is born out of trainings in diagnostic methods and graduate school ideology. Therapists need to remove these diagnostic goggles and witness the anguish of the person in front of them as a human process or adaptation aimed at regulating a bodily system. Clinicians have fought for a relational perspective (e.g., radical psychiatry groups) to “mental illness,” but the dominant biological narratives have drowned out their voices.

In 1980, the DSM-III (or third revision) restored much of the public’s respect and confidence in psychiatry. The DSM-III was an international bestseller in large part due to how scientific the book looked as well as the fact it aligned with the World Health Organization’s Internal Classification of Diseases, or ICD (Greenberg, 2013). Psychiatrist and trauma expert Bessel van der Kolk has written about the political fight for the inclusion of posttraumatic stress (PTSD) in the DSM-III back in 1980 as a means to cultivate services for Vietnam veterans. The inclusion of PTSD was less of a scientific discovery and more of a social movement to advocate for a disenfranchised group of individuals. PTSD is also somewhat counter to the idea that mental health conditions are “diseases” of the brain born out of faulty neurochemistry or chemical imbalances. PTSD places the impetus on environment and systemic factors as opposed to genetic heritability.

The work to include more trauma-related issues did not stop there in terms of seeking broader understanding of the effects of the environment or the impact of systemic dysfunction on people. Both van der Kolk and his colleagues rallied for the inclusion of “complex PTSD” in the DSM-IV as a necessary category for individuals who have experienced multitudes of adverse childhood experiences. The dose responsive or cumulative effects of trauma throughout childhood is now clear 20-plus years later, but the publication of DSM-IV in 1994 did not include complex PTSD. Based on this diagnostic rejection, clinicians have been forced to make narrow diagnostic judgments to capture symptoms related to panic, generalized anxiety, major depression, or—arguably most stigmatizing—borderline personality. None of these diagnoses captures the etiology of, say, living with a mother who sometimes comes home drunk or sometimes is lovable or the impact of having a father in prison or the longitudinal effects of listening to neighborhood gunshots when trying to go to bed hungry at night.

The diagnosis is both an effect and reflection of how the therapist sees you. This lens is present whether the therapist is aware of it or not. It is born out of trainings in diagnostic methods and graduate school ideology. Therapists need to remove these diagnostic goggles and witness the anguish of the person in front of them as a human process or adaptation aimed at regulating a bodily system.

An attempt was made to shift the focus of trauma in the DSM, which currently places a narrow window around witnessing or being informed about recent traumatic events to inform a diagnosis (e.g., PTSD). There is no placeholder for historical and political trauma within families across lifespans or generations. Abuse and neglect are the kinds of timeless trauma that erode the souls of children and forcibly shape their own parental decisions into adulthood. A petition was submitted to the APA for “developmental trauma disorder” to be included in the DSM-5 as a means to explain how adverse childhood experiences (e.g., abuse, neglect, family dysfunction) disrupt attachment and dysregulate the ability of children to pay attention (van der Kolk, 2014). A safe, regulated relational space is the fundamental element or building block to creating meaning and significance in our experience. However, as van der Kolk has noted, the latest edition of the DSM did not feel there was adequate scientific evidence for the inclusion of developmental trauma.

Common sense and clinical research were not enough to capture the fact millions of children—most of them impoverished—are being diagnosed with multiple disorders (e.g., ADHD, major depressive disorder, oppositional defiant disorder), each creating a link to a separate psychotropic medication. These seemingly specific diagnoses are ostensibly treated with the drugs that either arouse the system (i.e., stimulants) or dampen it (antidepressants, antipsychotics). This immensely large economy inadvertently solidifies the APA through sales of the DSM (e.g., $100 million for DSM-IV), trainings and research with these categories, and financial ties to the pharmaceutical industry.

The history of the DSM outlines pragmatic decisions in ways that reinforce the APA’s mission, brand, ideology, and obsessive fixation on the brain. Ask most therapists if the people they work with in therapy suffer from dark and twisted pasts that began with dysregulated caregivers, unbridled substance abuse, poverty, disavowed secrets, or a “chemical imbalance,” and it becomes clear the lens you see through has a huge effect on what we call a “disorder.” The cause and location of suffering is a political process with elected officials (e.g., clinicians), lobbyists (e.g., researchers), and an infinite market to commodify and treat the human experience.

According to Greenberg (2013), “any system guided by the invisible hand—financial markets no more than health care financing—is bound to be gamed.” He states as a society, we have been unable to get past the “a priori principle of psychiatry,” which is that our psychological suffering is a medical problem as opposed to social, moral, and relational. Compliance to this principle allows the dominant view of mental health problems to hold that they are located in the brain. However, as many therapists will tell you, any “disorder” shows up in our relationships due to the development and cultivation of stories we tell ourselves about who we think we are relative to our life events.

We develop ways or design paths to follow that specifically do not go near certain perceived feelings. The ultimate micro question of psychotherapy is, “What emotions are you avoiding in this situation?” The macro lens of maintaining mental health impairments within the individual—and specifically the brain—fits with the current cultural narrative or popular psychology and anti-stigma campaigns (e.g., National Alliance on Mental Illness or NAMI). Nevertheless, this dominant biological lens is a societal strategy of avoiding multiculturalism, personal responsibility, and capacity for attention within our human relational encounters as well as ignorance to the political air we breathe. If one contextualizes the last 50 years of mental health treatment—from Rosenhan’s experiment to the conundrums of the DSM related to the exclusion of trauma histories—how we ended up in this paradigm of care is clear:

Modern society has rested wellness “in the not-so-invisible hands of a medical-industrial complex whose proprietors have a stake in reducing suffering to biochemistry” (Greenberg, 2013). However, Greenberg goes on, “the line between sickness and health, mental and physical, is not biological but social and economic. It is the line between the distress for which we will provide sympathy and money and access to treatment, and the distress for which we will not.”

A question for you in the course of therapy is this: Based on their background and training, does your therapist have an invisible or imagined line drawn out for you?