Men with Gambling Addiction Likely to Have History of Trauma 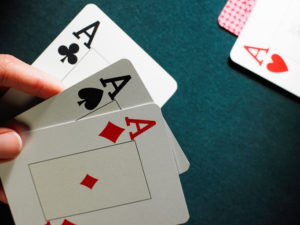 Men with problematic gambling habits are more likely to have witnessed violence or experienced childhood trauma, according to a study published in the journal Addictive Behaviors.

The Link Between Gambling and Trauma

The study, led by forensic psychologist Amanda Roberts, surveyed 3,025 men ages 18-64. Using the South Oaks Gambling Scale, the study assessed for problem gambling—a gambling issue that has not yet become an addiction—and probable pathological gambling. Participants also provided information about traumatic and stressful life experiences, as well as details about drug and alcohol use.

The study also found several mental health risk factors among problem gamblers. Thirty-five percent of pathological gamblers had serious financial problems. Twenty-nine percent had been convicted of a crime, and nearly 20% had lost relationships. Among non-problem gamblers, the figures were 12%, 9%, and 10% respectively.

In 2016, Roberts led a related study that established a link between gambling and violence in men. Based on a representative survey of men in the United Kingdom, the study found that problem gamblers were more likely to behave in violent ways, such as assaulting intimate partners. Men with the most serious gambling addictions had higher rates of severe violent behavior.