Men, Physical Injury, and the Myth of the Immortal Man 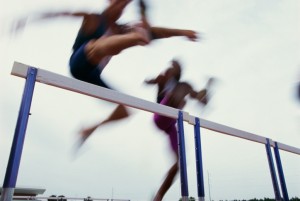 Deep within the recesses of the mind lurk psychological forces that can drive men to push themselves to the point of injury while playing sports or exercising. Men who feel a need to push themselves past their limits, which can occur when myth or fantasy leads them to believe they are invincible, may be prone to debilitating injuries. To better understand the psychological forces that may lead to male injuries, let’s look more closely at these layers of fantasy, myth, and fear of vulnerability in the male psyche.

A primary function of the fantasy of invincibility is that it can be a remedy for an emotional wound. If a boy feels timid physically and is criticized or shamed for that timidity, he might create a fantasy image of invincibility in order to protect himself from further embarrassment. The fantasy then becomes a source of motivation to become stronger and more confident.

The problem with fantasy is that it can begin to unconsciously drive behavior and may become difficult to distinguish from reality. Injuries occur in the gap between what men fantasize their bodies can do and what they can actually do. As men age, this gap widens because the body breaks down more quickly while the fantasy remains static. For “weekend warriors”—men who exercise extensively but inconsistently—especially, injury is a byproduct of the expectation or fantasy that the body is immortal and is capable of responding like it did in one’s youth.

The problem with fantasy is when it unconsciously drives behavior and cannot be distinguished from reality. Injuries occur in the gap between what men’s bodies can do and what they fantasize they can do.Another powerful psychological force that sometimes drives male behavior is mythology, in particular the myth of immortality. Myth lives alongside personal fantasy in the unconscious mind and helps one construct an image of oneself. Fantasy is a personal unconscious creation, whereas mythology is a collection of stories from a particular cultural or religious point of view. Myths often have recurring themes and are descriptive of a culture’s values.

Western mythology is teeming with images of heroic, immortal men, where ubiquitous themes of immense bravery and superhuman strength offer a mold from which man is to be sculpted. The most memorable mythological heroes—Theseus, Hercules, and Perseus—certainly fit this mold. If a man feels insecure, weak, and vulnerable, it makes sense that he might unconsciously try to feel stronger by fitting himself into one of these mythological molds.

A third psychological force that can contribute to injury is an unconscious fear of vulnerability. This fear stems from a relatively common belief that admittance of vulnerability may set off an irrevocable chain of events: uncontrollable crying, increased dependence/neediness, and an inability to perform. In other words, it’s a man’s fear that he will revert to being a helpless boy.

As Donald Winnicott, a prominent English psychoanalyst, explained in his paper The Fear of Breakdown, the fear is based on a memory of an emotional wounding, when a young boy buries the pain and the depression and anxiety surrounding that pain. What man fears most, according to Winnicott, has already happened. If a man does not address these unconscious feelings of fear, depression, and anxiety, he may injure himself because his efforts to avoid feeling vulnerable can create a desire to exercise too strenuously, overextending his body.

Injury can serve as an opportunity for men to grow. By exploring and developing an awareness of the aforementioned psychological forces, men can align more with reality, prevent further injury, and change painful patterns that may keep them stuck in their lives in other ways.

Developing an awareness of what drives their behavior enables men to recognize when their choices stem from fantasy. Reality can sometimes be tough for a person to accept, but aligning with it can bring freedom and self-confidence.

To prevent injury, the first step is to develop the self-awareness to know if and to what extent these forces exist inside of you. For those of you who have sustained a physical injury, ask yourself some of these guiding questions to help you build self-awareness:

Continue asking yourself these questions and listen for the answers, not from your head but from the source of your injury.

Talking with a therapist is also an effective way to continue exploring the psychological source of your injury. A therapist can also help you cope with the injury itself and help you develop psychological tools to prevent further injury. Therapy is an environment created to listen to unconscious thoughts and feelings that otherwise remain silent. Once you are aware of the psychological forces at play, you can make healthier decisions regarding how you exercise.