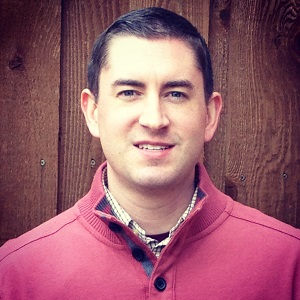 Although Blake Edwards, the 10th GoodTherapy.org blog contributor to be featured in our “Meet the Topic Experts” column, isn’t providing much in the way of direct psychotherapy these days—he’s primarily a foster care treatment director—he draws consistently on his background as a marriage and family therapist in shaping positive change for children, parents, case managers, and therapists alike.

A GoodTherapy.org member since December 2010, Blake has contributed articles exploring the challenges of working with adoptive and foster children, parenting styles, and the powers of perception, among other topics. He was gracious enough to take time away from his Dallas-based work to respond to 10 questions, designed to help fellow clinicians and other readers get to know him better personally and professionally.

1. What makes being a therapist worthwhile?

As a therapist, I have learned to see the world as an awe-inspiring web of interrelationships. I appreciate with a certain measure of humility the role of “problems” in preserving the sort of predictability and stability that human beings, for better or worse, crave. When problems are particularly destructive or debilitating, a therapist facilitates interventions to shift the status quo in a constructive direction.

I am involved primarily in a supervisory role at this time, having served as clinical director for a treatment foster care program in Dallas for nearly two years now. I do have opportunity in this role to provide regular therapeutic guidance to therapists, case managers, foster parents, children, and teens. My knowledge and skills as a therapist are worthwhile in such an environment.

2. Is family therapy more challenging than couples counseling? How so?

I do find family therapy to be particularly challenging, and I also find a “family therapy mind-set” to be particularly constructive, including with couples, and so I might challenge the premise of the question. I find positive changes to be most fluidly engaged when working with family systems of three or more involved members—and with the layers of social systems that participate in that larger web of interrelationships. In private practice, I saw the roles of such layers even in the relationships of couples.

3. You’ve written about Rollo May. Who or what else has influenced you as a therapist?

Rollo May was an existentialist, believing that anxiety is essential to human existence and that anxiety is an ever-present force contributing to the experience of being human. The implication of such an idea is that anxiety is in some regard at the core of all problems and at the core of all change. May was heavily influenced by the existentialist psychotherapist Otto Rank, who stimulated many integrationist ideas between the psychoanalytic thought of Sigmund Freud and the much older, existentialist notions of Søren Kierkegaard. Kierkegaard’s writings significantly shaped the early foundation for May’s thought. May was also challenged by contemporaries such as Erich Fromm, who applied concepts of anxiety to not only the individual psyche or to relationships but to societal forces from social justice to international diplomatic relationships. These giants worked to shape psychodynamic theory into a humanistic form and advocate for compassion as a scientific, social, spiritual, and even political paradigm. These are examples of the sorts of giants who have influenced my development as a therapist and now as a treatment director within the world of child welfare.

Experientially, I have been shaped by professional roles in church ministry with children, teens, and families, as a therapist on a college campus, as a case manager and therapist for teen shelters, an outpatient clinic youth and family therapist, a school-based therapist, a private practice therapist, and in providing therapy to foster children and teens as well as youth in the juvenile justice system. I have worked closely with state and local officials in child welfare, schools, and the juvenile justice system, as well as with many kinds of private community resource agencies and treatment providers. I have learned that the systems in which constructive change is generated for people of all stripes in our society are often too disjointed, working reflexively for their own institutional self-preservation more so than those they serve. This reality is far more typified by a lack of passionate and proficient leadership than a presence of apathy or evil. In short, we need more giants—torchbearers to guide our institutions toward fundamental changes involving the structuring, financing, and administration of services. This belief is a conviction that has served to shape my sense of vocation and draw me into my present work.

I am incredibly introverted. In the midst of a career in which I have found myself speaking passionately to large groups and managing large numbers of people, I systematically avoid small-talk conversation and small group gatherings. In these contexts, I find myself short on words. I literally do not process thought at the speed of social conversation, and my silence can easily be mistaken for disinterest.

5. How do you go about exercising self-care?

I have embraced my job as vocation—as an extension of my core beliefs, strengths, and identity—and I believe that is one of the more consequential forms of self-care. I boundary my work life from my family life and continually manage a balance between the two, in which my family takes priority. Beyond that, self-care, in its popular meaning, has always been a struggle for me in adulthood, as I rarely spend the time reading, running, spending quality time with old friends, and exploring new adventures in the world that I imagined I would. On a near daily basis, I find contentment eating meals with my family, with my wife watching our favorite shows, and helping my daughters get ready for bed. At the moment, we’re reading the original Pinocchio together. It turns out, it’s kind of creepy.

6. Do faith, religion, and spirituality factor into your work as a therapist even if none apply in the life of a client?

Absolutely. They do because my faith provides the most foundational paradigm in which I conceptualize my work, my world, and, in fact, all things. Above all, I believe my role is to embody the compassion of my Lord to others, and this is the standard by which I measure my own growth and development.

7. If you couldn’t do what you’re doing, what else might you be doing?

Yes and no. Young children are very impressionable, and this can work for good. A talented play therapist has vast opportunity to affect change, but this is primarily achieved when the larger family system and even layers of the social support system are engaged simultaneously.

Many teens I have worked with have been craving for years the sort of attuned involvement in their lives that our work together has provided, and as such, there is vast opportunity for affecting change when layers of family and other natural supports are engaged and when they have some clear ownership in the process.

Adults are, not surprisingly, very similar in these regards. By the time an adult is participating in therapy, it is likely that they are seeking a more authentic connectedness to others and a more deeply fulfilling embodiment of their own strengths and desires and are quite open to many therapeutic interventions toward these ends. Yet, adults, in my experience, are far more onerous, as clients, than children.

9. What mental health issue do you see most often in your work? How do you approach it?

In my particular work in treatment foster care, we provide treatment for a wide array of mental health issues, but I am most often directly engaged in the ever-common scenario in which problem behaviors have arisen and foster parents are struggling to assert appropriate power and reinforce positive discipline with children and teens who have experienced some form of trauma.

I believe that all behavior must be considered in context of the multilayered developmental and social realities that have shaped and continue to shape the mind, emotions, and actions of a human being. I believe that all behavior has a communicative aspect. And I believe that the crucial task of intervention is to interrupt negative patterns not simply with the force of power but in the process of replacing old thoughts, experiences, and situations with qualitatively new and positive ones.

I attempt to facilitate this strategic approach to intervention by stirring into motion collaboratively developed short-term solutions that can be attempted and reassessed, particularly those that engage potential thinking errors and negative emotional feedback loops, those that nurture attachment bonds, and those that challenge the personal mythology and meta-narrative often entrenched in fear of abandonment, loneliness, and further losses to identity and relationship.

Carl Whitaker asserted that the two most critical responsibilities of a therapist in facilitating constructive change are “the battle for initiative” and “the battle for structure.” I believe that anxiety fosters growth and that the task of intervention is primarily the task of collaborative, intentional, and active leadership.

10. Many people are skeptical about the effectiveness of therapy. What would you say to them?