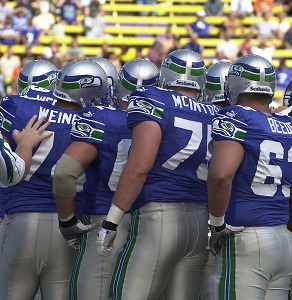 Sunday night was all about the Seahawks and their 43-8 defeat of the Denver Broncos, and it was a treat to watch the game in a local tavern in Olympia, Washington, just south of Seattle. Blues and greens were everywhere, and the resounding chants of one hyped-up fan yelling “Sea” and the amped crowd responding in unison with “hawks!” were just plain delightful to behold.

“I’ve been waiting over 20 years for this,” said my 28-year-old friend, who can easily be described as a “super fan,” between fist bumps, hugs, and high fives with other bar patrons.

I was especially intrigued when that same friend leaned in after the game was won and mentioned the mindfulness tactics employed by the Seattle Seahawks’ head coach, Pete Carroll. As has appeared in a handful of news stories, Coach Carroll incorporates meditation and yoga practices into his players’ physically demanding training regimen.

In fact, according to an ESPN report from late last year, his focus during his short time with the Seahawks has been to make the case for a more caring approach to football by building his coaching strategy around the idea that “happy players make for better players” (Roenigk, 2013).

Led by high-performance sports psychologist Mike Gervais, the Seahawks engage in both group meditations and visualizations as well as individual meditation sessions. Practices start with instructions such as, “quiet your minds,” “focus your attention inwardly,” and “visualize success” (Roenigk, 2013).

Quarterback Russell Wilson, who shared in an earlier interview about his faith in God guiding much of his ability and success (CBS Seattle, 2013), is known to partake in weekly meditation sessions with Gervais. “Support staff” are also on call if any of the players is going through a difficult time or facing a personal challenge and needs to talk (Roenigk, 2013).

The overall idea is to promote the mindset that physical and mental health and well-being should be nurtured and valued in the players, along with their exceptional athletic abilities, of course.

Particularly in light of reports in recent years that reveal the potential dangers football players face with regard to head injuries—specifically concussions and a condition known as chronic traumatic encephalopathy, as well as the belief that suicidal ideation may be related to such injuries (Park, 2010; Fish, 2012; Neporent, 2013)—a more conscientious approach may be just what the sport needs to continue progressing without provoking long-term health consequences for some of its players.

Researchers have introduced improved helmet designs, such as the Riddell Revolution helmet, in an attempt to protect against head injuries among football players. But even though the researchers at Wake Forest University in Blacksburg, Virginia, found their particular helmet design to be somewhat successful in reducing the number of concussions in eight college football teams as compared with data from previous years, they still concluded, “The most effective strategies are altering league rules and teaching players better techniques” (Hanson, 2014).

Others have argued that the injuries themselves are not what provoke the feelings of depression and isolation that may lead to suicidal behavior; rather, it is the lack of emotional and psychological support available to players. Jimmy Stewart, a former pro football player turned licensed family therapist who specializes in posttraumatic stress, told ESPN that he desperately needed someone to talk to during his time in the league. He’s since been lobbying for staff psychologists to be available on every professional football team, and was encouraged to hear about Pete Carroll’s efforts to spark change (Roenigk, 2013).

Whatever the reasons for the Seahawks’ Super Bowl victory, Carroll’s emphasis on mindfulness and respect, coupled with meditation practices and ongoing emotional support, may just pave the way for a more health-conscious future for professional football.