How Making Up With Your Partner Can Hurt 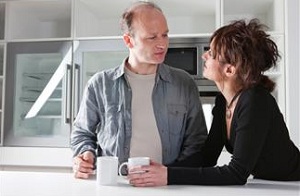 Marcie remembered the good old days but she tried not to because they made her cry. On days they popped into her mind, she remembered Mel speaking softly, looking into her eyes. That was breathtaking. It was such a bygone era.

She got busy with her work. Why in the world did she have to subject herself to this cruelty? All she needed to do was concentrate on the report she was working on. It was really interesting, actually. She was learning more and more about the global economy in this new and fascinating job. She was so lucky to be here, especially in a time of epoch unemployment. She brightened, thanking Whomever for her good fortune, and plunged into the report. Mel was gone from her mind, and it was a good thing, too.

The moment Marcie got off the train her heart sank as if on cue. The bright and beautiful day withered in anticipation of another horrible evening.

She walked in the door and started getting dinner ready. Her children came tramping through the house shortly, home from practices and after-school activities. She enjoyed them immensely; she didn’t know how she would have survived the last 15 years without their chatter and their energy.

Amanda, the oldest, started telling her mother about the bickering of the girls on the volleyball team. There were complaints as to who would receive—or not receive—the ball. Certain girls thought they were more skilled and ought to be given the ball as a matter of course. “That doesn’t make sense,” Marcie responded. “I don’t know that much about the game, but isn’t who you throw it to more a matter of who you are closest to and is the most logical throw?”

“You would think!” answered Amanda, walking out shaking her head. She felt better because Marcie had validated the conclusion she’d already come to. She bounced upstairs to her room, in a better frame of mind to start her homework.

Wishing her own troubles could be so easily resolved, Marcie got involved in her dinner dish. When she didn’t feel rushed, it gave her pleasure to come up with something really tasty yet different.

The front door opened and closed. Mel came in quietly. He announced himself with a “Hi,” and began to head for his room to work on the computer. They were just strangers living under one roof. “What’s wrong with me?” Marcie thought. “Am I ugly? Stupid? Why can’t we talk anymore?” Those are the thoughts she shouldn’t have had. They would always bring her down that path to what was good once and how empty everything was now.

But she couldn’t help it. Somehow, she’d had enough.

“Mel!” Marcie exclaimed. Mel looked up, a serious, distracted expression on his face. He’d brought work home from the office and he felt pressure to get it done. In this awful job market, he had to do way more than he should just to hold steady. People had been let go, and now the rest of the firm was doing double the load.

“Can I talk to you?” she asked. He knew her request was reasonable. First of all, they never talk, so he surely could indulge her. Second, it was dinnertime, a normal time for couples to talk, and he knew that.

Before she knew what was happening, Marcie was crying. She hurried to the door to shut out potential underage intruders, but the tears didn’t stop. “We’re strangers! She blurted out.” Mel’s eyes narrowed, uncomprehendingly. He waited for her to go on.

“Don’t you see?” Marcie asked. Why is it that with men you have to draw them a diagram, she wondered. But she went on, “We never talk, do we?” Mel agreed. “We never do anything together any more. It’s all work, stress, responsibilities.”

“Well, it is,” Mel said defensively.

“Mel, this is not life. We could be trying and trying to get our heads out of the water and never even make it, who knows? We can’t predict everything. There’s only so much a human being has control over. What if we did all this for nothing? Wouldn’t it be better to have a normal marriage in the meantime?”

Mel was silent, deflated. All his hard work trying to be a provider was not appreciated! He was about to turn around and head to the computer and just ignore all this, but something Marcie said rang true. “What do you want me to do?” He said, tiredly.

“Well, let’s talk more. Let’s take a walk. We can talk and walk, how about that? And when you come home, come over to me to say ‘Hello.’ Don’t just shout from another room. How are these things for starters?”

“I can do that,” Mel said, thinking a walk would probably be good for him anyway. “It doesn’t seem so hard.”

That was a Tuesday. They both got up and took a walk. They made a plan not to talk about the stresses they were under. They fished and searched for topics and it wasn’t easy; they were so out of the habit of talking. But at least it was different and they were together.

Wednesday, Mel came home and remembered to go over to Marcie to say “Hello.” He even managed a smile. They made time for a walk. The children were amazed. Marcie’s heart started to warm. She felt so close to Mel. She imagined it was like the old times again. She felt so good when he took her hand! This was wonderful. She opened up to him and started to tell him some of the thoughts that she had not expressed for many years. She felt connected. They even were intimate that night, the first time in a long time. Marcie woke up with tears in her eyes, thinking of how special this all was.

But that afternoon, Mel’s boss let him know who would be getting their pink slips on Friday. Mel was disturbed because two of those individuals were his key people. What was the company up to? Why did they do this without consulting him? What message was this supposed to be?

Later, as he walked in the door, he was still turning this problem over and over in his mind. He forgot to say “Hello,” let alone say it to Marcie directly. He went over to the computer and mindlessly opened it up, but he couldn’t concentrate. He stared at it.

This unexpected backslide caused Marcie intense pain. She had been anticipating Mel coming home with a sense of rare pleasure; she was open to good things for a change. She was vulnerable. And then she was slapped in the face. She collapsed in a chair, crying openly, heaving great sobs. Mel didn’t even hear them from his office. His mind was elsewhere.

This happens to people a lot. And then they get divorced because they say, “We tried reconciliation and it only lasted a day. Hmmmph. Snort.” From their viewpoint, it looks like making up is really bad for your marriage. And if you used one day as a measure of how well it works, you’d be right.

But you’d also be right if you gave up piano or tennis or ice skating after one day because “it doesn’t work.” Neither a sport nor a musical instrument nor a marriage is going to be learned in one day.

Let’s get back to Act II—because Marcie wasn’t about to give up.

Marcie told the curious children to go to their rooms and she went into Mel’s office, closing the door softly. He looked up, suddenly realizing his omission. “Do you know why it hurts more today than it did the day before yesterday?” she asked.

Mel looked blankly at her. “No, why?” he asked.

“Because I thought we’d finally made it, that we were finally a couple, that we had finally created a real marriage. I was happy for the first time since I-don’t-know-when. So when your expectations are really high, they go down much faster and harder when they are dashed.”

Mel narrowed his eyes, still looking intently at Marcie. “I’m sorry I let you down,” he said softly, “but I’m in a terrible frame of mind.” He told her the story of work.

“Maybe you need a hug,” Marcie said. Mel brightened and got up, went over, and hugged his wife.

Marcie and Mel may have to remind one another often to stay on track and keep the marriage front and center. That’s okay with them. No one can tell either one of them that making up was a mistake. By the way, although the names have been changed, this is a true story.

Related articles:
Understanding: It’s What’s Missing in Most Relationships
Living with Frustration in a Relationship
Falling in Love Again with Someone who Hurt You