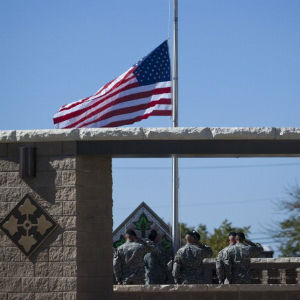 For the second time in five years, Texas’ Fort Hood is mourning a mass shooting. The alleged gunman, Spc. Ivan Lopez, was an Iraq war veteran undergoing treatment for posttraumatic stress (PTSD), depression, and anxiety. Reports are beginning to surface that an argument over leave time to attend his mother’s funeral was the final straw for Lopez.

More than two million soldiers have served in Iraq or Afghanistan, and 20% of these veterans have symptoms of PTSD. The military continues to struggle to treat these veterans. Some are hesitant to seek help, while others find that long waiting periods and improper care make seeking help feel like wasted effort.

For veterans who are too affected to work, the picture is even worse. Veterans, on average, wait nine months to see their disability claims approved. Some veterans wait a year or more.

Lopez saw only four months of combat, but it’s not uncommon for soldiers to spend years in war zones. Many soldiers deploy on multiple year-long tours of duty, and some have to redeploy even after a diagnosis of PTSD.

Among soldiers diagnosed with PTSD between 2000 and 2011, a majority were diagnosed while deployed.

Legislation to Improve Screening and Care

Less than a week prior to the latest Fort Hood shooting, Pennsylvania Rep. Glenn Thompson introduced legislation requiring mental health screenings for all incoming military recruits. The bill would also require screenings for outgoing service members, since the trauma of active duty and deployments can lead to PTSD. Thompson argues that such screenings would ensure early intervention and proper treatment for troops struggling with mental health challenges.