Kids with Disabilities More Vulnerable to Bullying Over Time 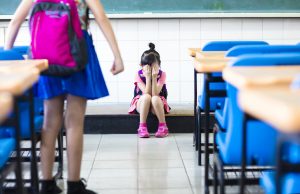 Bullying Among Children with Disabilities

For the study, researchers followed 6,531 students in grades 3-12 for three years. Sixteen percent of participants had a disability. The overall bullying rate peaked around third grade, decreased in middle school, and then increased again in high school. Children with disabilities were more likely to experience bullying in all grades and age groups, and while their rate of bullying followed the same general pattern, it remained significantly higher than that of children without disabilities.

The Effects of Bullying

Twenty-two percent of children ages 12-18 report being bullied at school during the past month. Both bullies and their victims can experience negative mental health outcomes, including a heightened risk of depression. Bullying can damage self-esteem, contribute to anxiety, trigger academic and social difficulties, and even cause physical health issues such as headaches. Bullying is also linked to risk of suicide.

Research suggests even just observing bullying can harm mental health. According to the Centers for Disease Control and Prevention (CDC), students who observe bullying report more feelings of helplessness and disconnection. They are also less likely to feel supported by adults, including parents and teachers.