Judge Not: The Problem with Parent-Shaming 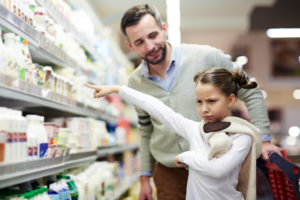 My 8-year-old had a quiet but furious tantrum at a friend’s recent birthday party. Her tantrums have graduated from flailing and screaming when she was younger, to basically freezing up and refusing to speak or move. It’s an almost elegant way of dealing with extreme anger or, more likely, high anxiety.

When I told the birthday girl’s mother I was taking my daughter home early, she sighed and said, “I would never let mine get away with that.”

On BuzzFeed the other day, Stacia Brown wrote about this issue of parents having opinions about other parents’ choices. She writes about the challenge of staying calm and rational—our best selves—while parenting whiny, loud, or rambunctious kids. Sometimes we can’t, and instead we yell or snap at them. Brown writes, “It is then that the glance—and sometimes the word—of a startled onlooker is also needed. It recalibrates us.” She believes that judging each other as parents can be a helpful barometer of how out of control we’ve gotten in that moment.

Maybe. But the reality is that we can’t always be our best selves. When we catch ourselves and others acting imperfectly, we can sit in judgment, but that has two inherent flaws. One is that we might be wrong about what we’re seeing—we can’t know what’s going on in that family’s life or why they make their choices. The other flaw is that judgment is often shaming and can make the parent feel even more out of control.

Empathy, on the other hand, actually helps. Even when we don’t approve of someone else’s parenting, could we choose instead to feel the camaraderie of one who has been just as frustrated, just as reduced to being temporarily mean or too-easily manipulated? Since it’s true that we’ve all been there, wouldn’t it make more sense to stop criticizing others when they get there too?

At that birthday party, the other mom assumed that I was being a permissive parent, but she was wrong. My daughter was in the middle of a panic attack brought on by the party’s black light, throbbing music, and crowded scene. I know her well enough to know when she needs a break, what she’s capable of pushing through, and how long she can stay withdrawn if she’s pushed too hard.

So in this case, it was easy for me to feel indignation because I was parenting well. At other times, however, I make boneheaded parenting moves. Another mom might see me in a grocery line giving in to repeated demands for candy. Or threatening my daughters with “consequences,” my teeth clenched, after their fifth fight in Target. What would it be like if, instead of feeling like they had to police and “recalibrate me,” other parents offered knowing smiles and encouragement? For me, this kind of empathy would help me feel supported, calm down, and get to my best self more quickly than would their shaming looks or comments.

It’s fairly simple science, really. When we are stressed, our bodies react by pumping adrenaline and cortisol from the brain to the muscles. We need to calm ourselves, or else we’re likely to make quick, hot-blooded decisions. Studies have shown that human beings regulate their nervous systems in response to other human beings. In other words, as the people around us get anxious, so do we. Conversely, when the people around us keep their heartbeats steady, ours steadies along with them. This means that, physiologically speaking, kindness always helps more than criticism.

It’s human nature to judge and find others wanting. It makes sense to believe fiercely that our brand of parenting is best—after all, that’s why we chose it in the first place. And we’ve been scared enough by media stories of child abuse to think we have an imperative to watch other people’s treatment of children. That said, most of us are pretty good parents, struggling along with love and good intentions, screwing up over and over again. And most screw-ups, even those involving raised voices and poor choices, are not at the level of abuse. Unless we see repeated poor treatment or severe physical and emotional cruelty, we should probably keep our opinions to ourselves.

There’s a saying that “everyone you meet is fighting a battle you know nothing about.” Maybe that mom not picking up her squalling baby at the beach knows the child cries a little before he or she falls asleep. Maybe the dad on the plane is letting his son play five hours of World of Warcraft because the child becomes highly anxious while flying. We can’t know other people’s children, their lives, or their choices.

When it’s asked for, a reasoned bit of advice can be helpful. If you see me grappling with my kids, please call me the next day, offer your experience, and check in to see what I’m dealing with or why I’ve made my parenting choices. But in that moment of struggle, can we all try a little harder to support each other? Parental empathy is indeed difficult. Let’s put as much effort into worrying about the parents as we do into worrying about the kids.