It’s Scary Being a Grown-Up 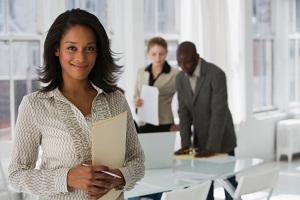 “I just got a promotion to be a supervisor,” Janet told me as soon as she sat down in my therapy office. “I know I should be thrilled, but I’ve never been in charge before. I’m kind of scared: Oh, no! How am I going to supervise Ann? She’s my good friend, and we’ve been working at the bank together for three years. This is terrible. Everyone will think I’m so full of myself.”

When we grow up, we gradually develop a sense of who we are in the world, what we want and need, and what makes us unique. We individuate from our parents and get comfortable with our differences. We increasingly become independent and make choices about how we live our lives. What can be difficult, as we enter adulthood and beyond, is feeling comfortable with our own authority. This means allowing ourselves to feel powerful, knowledgeable, and responsible. It means we take ourselves seriously and expect others to do so as well. Accepting ourselves as having authority is necessary if we wish to succeed in the workplace and in relationships.

Janet had serious worries about taking on the position of supervisor. She had received exceptional evaluations at work and clearly was highly regarded. But in spite of her excellent performance and reviews, she lacked self-confidence and didn’t think of herself as the competent worker portrayed in the evaluations. In fact, although she was 29 years old, she experienced herself, for the most part, as “the kid.”

As we explored Janet’s worries about the consequences of her promotion, she was able to focus on two crucial questions: (1) What is in it for you to give up being “the kid”? And (2) what is the risk of being the grown-up?

Janet associated being a kid with being taken care of by her parents, who were warm and loving. She liked that they were proud of her, and she saw them as instrumental in guiding her through many major decisions. They helped her when she was deciding on a college and with what she should major in. (She decided on finance, the same field as her parents.) They had been wonderful when she had relationship troubles and had helped her break up with two boyfriends she had a lot of uncertainty about. They were an important and involved part of her life. She liked that they always talked to their friends about her as the “good kid.”

Janet explained: “We almost always agree and we never fight. We are so on the same page about everything. It’s been great for me to have their strong voices in my head so I always know exactly what the right thing to do is, and then I know I’ve done the right thing. I guess as long as I’m ‘the kid,’ I can rely on using how my parents see things to figure out how to live my life. Hmm … I never really thought about this, but I guess I don’t have to think for myself very much and so I figure everything I do is OK. I’m safe and OK. I mean, my parents are older and wiser, and maybe I feel that they’re the responsible ones if there are any problems. Not me.”

For Janet, recognizing what felt good about being “the kid” was much easier than knowing what felt risky about being the grown-up. Early in our explorations, Janet made an interesting discovery: “You know, this may sound strange, but I think being a supervisor forces me to acknowledge that I’m responsible. What’s strange is that I can see now that I’ve always been responsible for my work, but somehow I didn’t let myself know that. If I’m the responsible one, then everyone is looking at me. I’m front and center. It’s much too risky to be so visible.” It was Janet’s feelings about her visibility that led to a much fuller understanding of how she saw the risks of growing up.

The notion of being seen means you stand out. A child who feels like an extension of his or her parents does not have a unique self that is available to be seen. In contrast, a child who individuates and develops a distinctive sense of self in the world is able to assert his or her wishes, feelings, thoughts, needs, etc., and take ownership of them. For Janet, it was safer not to individuate. Being seen and taking responsibility for herself was a scary idea.

Janet recognized, since the day she came to my office and told me about her promotion, that there would be consequences for her social relationships. At the outset, Janet worried about supervising former friends and peers. She no longer felt like she could be one of the group. Now she was too visible and would stand out as a supervisor. “If I’m going to be a good supervisor, I have to comply with the demands of my position,” she said. “I hate this. There will be too much attention on me. It means I can’t just be the nice and agreeable kid. Now I have to be a grown-up. How will my friends ever be able to like me? Oh, my god, I just know there will be conflicts. I don’t know if I can do it.”

I could see that Janet was getting increasingly anxious about how her relationships at work would be affected. But I also understood that this issue was not just about work. In our work before her promotion, Janet had begun to talk about her ambivalence about asserting herself in her friendships and intimate relationships. What the promotion highlighted was that in many areas of her life, she had avoided situations where she would have to know her own thoughts and feelings, take responsibility and grow up. I believed that as Janet continued to explore the issues raised by her promotion, she would understand more about her relationships in the world and she would become less invested in being “the kid.”

So Janet and I dug in. Janet worked hard and was able to come to see that she had been behaving in relationships to repeat her good-kid role. She began to question her belief that behaving like a grown-up and having differences in relationships meant she would be disliked and rejected. Janet realized that she was scared for many reasons. She believed that being seen put her at risk for being perceived as standing out or showing off. “I always tried to keep a low profile at work,” she said. “I quietly worked hard and wanted to be the best, but I didn’t want anyone to think of me as competitive.”

She was scared that using her authority as a supervisor would make her feel and be experienced as not nice, mean, or hurtful. She made the important connection that her worry that she would be perceived so negatively as a supervisor when she asserted herself was similar to her worries in her relationships with men. With the two men she had broken up with, she wondered if her uncertainty about them may have been her way of not expressing her differences with them. “Maybe I just let myself think they weren’t right for me rather than risk getting involved in a way that let them know my thoughts and feelings,” she said. “I’m not sure. Now I’m beginning to let myself know what I want and feel. But maybe back then, I didn’t even know what I felt or how to assert myself. I was just too scared to create conflict.”

As Janet gets more comfortable with her authority in the workplace, she is more able to reflect on her fears and anxieties in the world. We have begun to talk about her worries about having conflicts with her parents. She is afraid that her parents will become angry and withdraw their love and admiration. Nevertheless, she occasionally tests the waters and expresses herself to them as a separate person. She is becoming more self-confident in her relationships and is able to notice that her expectations of being disliked and rejected for expressing her thoughts and feelings do not match her experiences. Taking small but consistent steps to discover and be who she is, to assert herself as a knowing, responsible person in the world, and to question “the kid’s” assumptions, has put Janet well on her way to becoming a grown-up.