It Takes Courage to Date 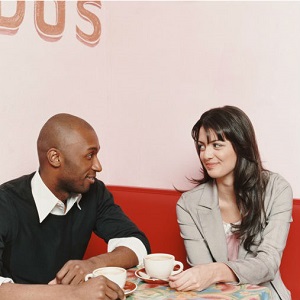 I think I spent most of my twenties in a state of perpetual angst. There was a constant knot tightening tighter and tighter in my stomach. Some of this may have been due to working in the stress-fueled film production industry, but most of it, I think, was owed to the horrors and excitement of the dating lifestyle.

Nothing ticks up worry and anxiety like a little dip in the dating pool. We constantly try to look good, shave our legs, dab on something that smells nice, put our wittiest selves on display, and spend hours analyzing the tea leaves. “What did it mean when he said …” “Does she like me?” “OK, when he said, ‘I’ll have the same,’ did he really want the same or is he a suck-up?” It’s a time of introspection on overdrive, of hedging our bets by assessing all the single people we meet for date-ability, and of vetting the dating sites to pick the best one—eHarmony if you’re serious, OkCupid if you’re not, Match somewhere in between (or is it the other way around?). Dating is messy, arduous, worrisome, and a blast, too! It’s the ultimate ride.

Yes, dating is not for the faint of heart, yet most of us have to face it at some point. The whole dating (courting) thing has gone on for thousands of years, yet no one has mastered it—other than arranged marriages, no one seems to come up with a better solution for finding someone to go through life with or spend time with.

Dating comes up a lot in therapy. It dredges up uncomfortable feelings in otherwise confident and competent adults. It can leave folks breathless with anxiety or anticipation, totally sick to their stomachs, and everything in between. Some people avoid it altogether. Some have one bad experience, shut themselves up in their moldering house, and never leave again—Miss Havisham, anybody?

Dating is a judgmental business. It’s the ultimate reality series. How you “frame” the idea of dating, how you think of dating, can make it more emotionally doable. How high are the stakes? If no one winks at your profile, is life over? Or is this an adventure, an experiment to see whom you like? Winks go both ways.

Here’s an idea that may make the dating journey a little more comfortable. (It’s a marathon, not a sprint.)

You see, you get to pick. You get some control. You get to think about what is important to you to have on your team.

Then, as Bette Davis says in the film All About Eve, “Fasten your seat belts. It’s going to be a bumpy night.”