In the Room with a Father 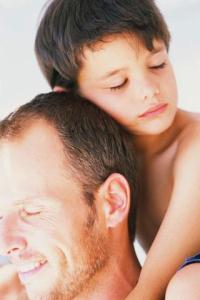 As a psychologist, I see many dads who take pride in and also struggle with being a father. In honor of Father’s Day, I would like to offer some reflections for fathers, families, and therapists about the importance of recognizing and celebrating fathers in therapy. Let’s start with a quiz:

4. How do kids benefit from involved fathers?
a) Children with involved fathers are more confident.
b) They are better able to deal with frustration.
c) They have better cognitive competence as seen in higher grade point averages.
d) They are more likely to mature into compassionate adults.
e) All of the above.

5. How do fathers benefit from being involved with their families?
a) Involved fathers have a sense of accomplishment, well-being, and contentment.
b) They engage in less risky behaviors contributing to a longer life, fewer accidents, increased physical activity, and reduced risk of suicide.
c) Involved fathers have less frequent jobs changes.
d) Being involved helps men to reevaluate their priorities and become more caring and concerned about future generations.
e) Being involved increases intergenerational, extended family, and other external social interactions.
f) All of the above.

How many did you get right? If you missed a couple of answers, don’t feel bad. It is not often that we stop and consider fathers. People are often surprised at the sheer number – in 2006, over half of the 108 million men in the US were fathers. Despite the clear relevance of fathers, as a society we have been slow to recognize them. Sixty years after Mother’s Day was established and after several defeats by Congress, President Nixon passed the bill that established Father’s Day. Historically, fathers had been largely invisible within the child development literature until more recently. Even today, much of the clinical attention given to fathers is related to their children, with limited focus on fathers themselves and their experience.

Over the past several decades, significant social changes have resulted in an explosion of new roles and responsibilities for fathers. From the role being limited to income earner, today’s fathers are expected not only to provide, but also to be nurturing and supportive of their partners and children, involved in their children’s school and sports, good role models, caretakers, and so on. But what background do most men have to be good fathers? Boys have generally been taught from a very young age to be tough, to be competitive, and to not show feelings (and definitely don’t cry). A majority of todays’ fathers say that they cannot use anything from how they were fathered to raise their own children. They can feel frustrated and confused as they juggle the many roles of a parent without much training.

Therapists can help fathers by seeing them not only in terms of their influence on their children, but through a broader lens that recognizes their experiences, strengths, and challenges. Just as many men lack training on how to be a father, therapists often lack formal training to work with fathers. My book, Counseling Fathers (2009), as well as the current national survey I am doing are aimed to bridge the gap between fathers and therapists. For good therapy with fathers, it is important to know more fully about fathers’ experiences and their needs and to understand what therapists bring to the room when working with fathers. If you are a father or a therapist (or both) and would like to add your two cents, please consider participating in a brief, anonymous study.

1) Help fathers identify their strengths
“Traditional therapy does not deliver long-term sustainable results. Quit focusing on the dysfunction and problems of fathers.” (quote from a father who completed the survey). Fathers tend to respond well to what they do well. Help fathers identify their strengths at work, sports, or in other areas of their lives and helps them generalize to their roles as fathers.

2) Recognize the positive benefits of being involved, not only for the kids and partner, but also for the father.
Remember the quiz. While it is true that children with involved fathers have more confident kids who do better in school, being an active part of the family leads to a better, happier father. Good fathers engage in less risky behaviors – I had a father who decided to quit smoking once and for all so he could be there to walk his daughter down the aisle. Involved fathers take better care of themselves – they get that pain checked out or stop putting off going to the dentist. When a father is involved with his children, he is likely to be more physically active and happier too. Help fathers explore and identify ways that they can be involved and recognize the ways they are involved.

3) Ask for help and support from your partner.
Fathers: allow yourself to ask how to do things you are not sure of. Ask to be respected when you try new things with your children. Fathers who feel supported are more involved with their kids and are more confident in their parenting. Many fathers are not comfortable asking for what they don’t know. Discuss with fathers shame about not knowing what to do as fathers and how to ask for help. Help fathers plan their activities and involvement with their children and ask for help and support from partners. Help fathers learn to ask their partners to recognize their efforts of being involved.

I believe that fathers and their strengths should be acknowledged and celebrated on a daily basis, but it is a good start to focus on Father’s Day.