How Did I Miss This? Seeing the Signs of Autism Spectrum 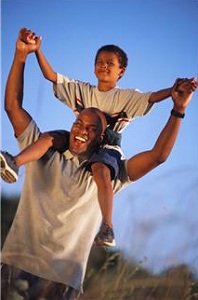 I recently read a very poignant, beautifully written piece in the Huffington Post from a dad who discovered his son had high-functioning autism at age 9. The heartfelt article struck a chord in me and stirred up mixed emotions. As a parent there are few things worse than discovering something is “wrong” with your child. Perhaps having to be told about it is indeed worse. Especially after years of not seeing it. My own son was diagnosed at age 3-1/2 years, and I vividly recall agonizing over not making the discovery earlier. So how can parents live so long with a child and miss it?

The majority of parents I see in my office report that their children with autism developed typically until somewhere around 18 months to 2 years of age. My own son fit the same criteria.  I recorded each new smile, word and wave bye-bye in his baby book and reported them proudly at each visit to his pediatrician. As a new parent, no one tells you the possibility exists that your child could actually lose skills. The combination of disbelief and confusion causes you to question your own judgment and then hurls you into denial.

Denial is actually our brain’s way of protecting us from something we cannot emotionally and psychologically handle. It is a stage of grief; but it is not meant to be lived in, just passed through. We don’t usually know we’re in denial until we start coming out of it.  That gut level feeling that something is “just not right,” the hindsight of the times your child just couldn’t keep up with the other kids, or make and keep friends. Denial can become your permanent home if you choose not to trust those instincts that something might be wrong.

As a professional who has worked in the field of autism (both as a special educator and now a therapist) I am disheartened to admit that many schools and doctors have missed the mark when it comes to proper diagnosis and treatment. I’m not sure if this is a result of improper training or an unwillingness to be the one who slaps that scarlet letter of an “A-word” on a child, but I suspect it may be a combination of both.  A large majority of the professionals I have met who do venture into such territory often don’t have a clue in what direction to send their patients. I’ve heard countless horror stories from parents who were told their child would “outgrow it” or that they had “nothing to worry about.”  On the other end of the spectrum, one local doctor even had the nerve to tell a parent to stop saving for college and get a good marriage counselor because “Your kid won’t go to college and you’ll be lucky if you’re still married in 5 years.” Needless to say, I helped them find a new doctor.

I often hear parents say, “He was a little quirky, but we wanted him to be comfortable being himself.” or “I know she shouldn’t be doing _______, (insert repetitive or odd behavior here) but she seems to know what she needs, and I think it might be helping her regulate herself.” These parents don’t love their children more than others, they are just focused on helping their child develop into whomever they are supposed to be; without judgment, criticism, or condemnation. Parenting is not about the parents but about what their child needs.  Unfortunately, sometimes these beliefs can keep a parent stuck, postponing an inevitable diagnosis. When this state of semi-denial is short-lived, then these parents often channel this emotional energy into the outside-of-the-box thinking that helps kids with autism grow, develop, and thrive.

For more info about the signs and symptoms of Autism Spectrum Disorder, go to www.nationalautismassociation.org.