I Hate My Job: Financial Security at the Expense of Emotional Security 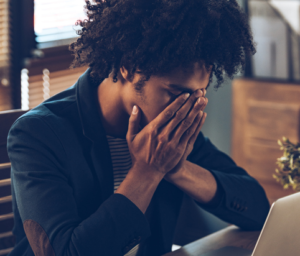 Despite doing well financially, many of the people I work with in therapy struggle with feelings of anxiety, depression, and powerlessness as they experience their work as meaningless and unfulfilling. They feel stuck and see no way to pursue more satisfying options. Most of us need to earn money to support ourselves (and, frequently, our families), so work can’t be only about self-satisfaction. Can the need for financial security interfere with life’s other options? Can people who enjoy (or are on the road to) financial success develop the freedom to consider options that might liberate them from their current depleting, frustrating career paths or can they get comfortable with the choices they are living with? Can a fixation on financial security function to obscure other anxieties?

For several years, I have been working with Jack, a lawyer in a prestigious law firm that demands large amounts of time and energy. He talks with his wife about starting a family but gets anxious when he thinks about how much he wants to change his job and how conflicted he feels about giving up a lucrative salary:

“I hate my job. I’m really sorry I chose law, but it seemed a solid career choice and I knew I never wanted to worry about supporting myself or a family. I didn’t want to struggle like my dad, who always worried about making ends meet and losing his job. My mom was very anxious about me and my sister and didn’t start to work until we finished middle school.”

I asked Jack what made him choose law and if there were any other careers he considered. He replied:

“In elementary school, I wanted to be a drummer. I was in a band in high school, and I guess thoughts of being a music major flitted through my mind. But I kept thinking about how miserable and anxious my parents always seemed about money and I never wanted to be in that position. I wasn’t good at science, so medicine was out. I figured being a lawyer would bring good money. I was always anxious about money and worried when I had to ask for things. I always wanted to go to camp, but that wasn’t possible. So I’ve always known I wouldn’t do that to my kids. But I don’t know that being miserable or working so much is good for anyone, either. I just don’t know what to do.”

I asked Jack if he ever considered changing jobs.

“I need to make money,” he said. “I wouldn’t want to burden my wife with worry or responsibility to work, especially once we have kids. I especially wouldn’t want to disappoint my kids or make them feel bad for me like I felt for my father. I suppose I don’t want to upset my parents, who I can imagine panicking if I didn’t make a lot of money.”

I responded: “Even though you are convinced there is no possibility for change, have you ever let yourself imagine or fantasize about something else you might like to do?”

Jack shrugged and looked annoyed. “What’s the point?” he said. “What good is imagination? I’m stuck unless I want to be incredibly selfish and give up the idea of having a family. And family aside, I don’t think I’d feel secure if I wasn’t making good money.”

In our sessions, Jack spoke about his unhappiness and depression: “I hate getting up in the morning to go to work. I get irritated with everyone and I feel like I’m up against a wall. If I let myself think about leaving the firm, I think, ‘What would that mean? Open my own law practice? Something different? Too scary.’ I don’t know if I could be a success. What am I supposed to do?”

In one of our sessions, I asked Jack to humor me and try to imagine he didn’t have to be concerned about financial security. Then I asked him to fantasize about what kind of work he would enjoy doing. After a long silence, he responded anxiously:

“This isn’t about reality, right? I mean, I can’t really imagine what would make this possible. But I can picture myself as a musician, like the Pied Piper or the Music Man. I could lead kids in a marching band. But that’s silly.”

“Well, I do still play drums and guitar, but that can’t be a real job that makes real money.”

I asked, “What would be a real job where you could play music and lead kids?”

“The obvious is a music teacher, which I guess I might enjoy, but it would never give me enough money. How could I raise a family on a teacher’s salary? How would I ever feel safe? My parents would freak out. It would be their worst nightmare if I gave up my law practice and became a teacher. I’d feel so guilty for worrying them and I don’t know if I could make that change and not worry myself. I don’t know what my wife would think, although she might be relieved since I’m so miserable in my job now. This is making me so anxious.”

I asked Jack: “Do you have any interest in using therapy to see if there is some way you can help yourself to feel less anxious without needing to make a lot of money?” I assured him I wasn’t asking him to consider making changes in his life: “I’m suggesting we simply explore so we can understand more about how you developed the thoughts and feelings that keep you so anxious and stuck.”

Somewhat reluctantly, Jack began to talk about his experiences of financial deprivation and the need for security. He recalled: “So much of what I remember are not really experiences of what I was deprived of. I remember feelings: being worried and scared to ask for things. I see my father’s distressed-looking face. But when I really think about it, I got a lot of things I wanted. I didn’t get to camp, but we took vacations, we lived in a nice enough house. We didn’t have a big, fancy car, but I don’t think I was ashamed of myself or my family. I just felt on edge. I remember my mother always asking how much things cost and telling my father they had to watch what they spent. She panicked about savings or future retirement. But the present wasn’t so bad.”

“So are you saying your worries about not having enough financially are connected to your parents’ worries, not to actually having real experiences of deprivation?”

“Yes! Wow! That’s right. I grew up in a state of perpetual fear of not having, even though I actually had more or less enough. I got a job in junior high so I wouldn’t have to ask for an allowance. Maybe I wanted my parents to be less scared so I wouldn’t have to be so scared. I almost feel like I need to be scared to make them less scared. Does that make any sense? It seems crazy.”

As his anxiety and worry about finances has decreased, there has been a parallel decrease in his overall sense of insecurity. This has significantly improved his sense of self-esteem and self-confidence.

As we continue to talk, Jack is realizing that while his family had some financial struggles, much of his anxiety about finances was developed from taking on his parents’ anxious relationship to the world. He began to talk about his parents as anxious people, not just anxious about money. He also began to describe himself as a person with many insecurities and anxieties:

“Actually, I get so caught up in talking about my financial insecurities that I haven’t talked much about all the other ways I worry and feel insecure in my life. I think if I feel safe financially, I feel less worried in general. When I feel financially successful, I feel better about myself.”

“Can you think of how that works?”

“The most obvious is socially. I can feel so uncomfortable around people. When my wife and I are with other couples, mostly her friends, I remind myself that they see me as successful, that I’m a lawyer, that I’m as good as they are. It sounds pathetic, but I can easily fall into low self-esteem, which really troubled me when I was younger.”

Jack has been managing his anxieties by believing life’s difficulties could be avoided as long as he had a prestigious job that paid good money. Talking about his self-esteem and self-confidence has increased his awareness of how he uses the idea of financial security to cover many of his insecurities. For example, he is discovering how he has buried fears about becoming a father by focusing on financial concerns. He is beginning to express his anxieties about disappointing his wife, not only financially, but romantically and sexually.

Jack constructed his sense of self around the idea he was a financially successful lawyer. He used money as a defense against emotional insecurity, which was a repetition of his parents’ ways of dealing with their life anxieties. He now knows this is not the whole story for him.

The more he understands how his anxiety developed and interfered with making rational choices, the more he can allow himself to reflect on his wishes and needs and move forward with his future. As his anxiety and worry about finances has decreased, there has been a parallel decrease in his overall sense of insecurity. This has significantly improved his sense of self-esteem and self-confidence.

Jack has begun to consider that being a lawyer may not be the only way to feel good about himself. We have been working on his noticing his likes, dislikes, talents, and desires. He is playing his music more—not to become a music teacher, but because he enjoys it and it makes him feel good about himself. He is working on expanding his interests. He and his wife are talking more seriously about starting a family. Jack remarked to me: “I think I’m ready to be a dad. Whether I continue with law or not, I can be the Pied Piper for my child. We can march together no matter what I do with my career. I know we have more talking to do, but I feel less anxious and more ready for some kind of change.”