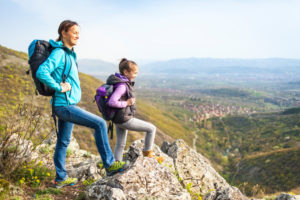 Parents, take heed. Kids see thousands of advertisements every day. Girls are especially susceptible to pervasive depictions of an idealized concept of femininity.

Images of stereotypically alluring women with flowing hair, full breasts, slender waists, and long legs sell virtually everything. Yet we want to raise confident girls who are able to value themselves for who they are on the inside. How can parents compete when kids are confronted daily, through every form of media, with a narrow and unrealistic standard of physical beauty?

We’ve come a long way, baby, from the gender-prescribing mentality of the 1950s, when a woman’s worth was derived from cooking, keeping a tidy home, and greeting her husband with a martini and a smile at the end of his workday. But this outdated, subservient view of femininity has been replaced with the idea that women are supposed to remain glamorous and sexy while their male partners are free to be pot-bellied slobs. Turn on an episode of just about any family sitcom from the past 25 years and you will find an impossibly stunning woman shaking her head at the ridiculous antics of her slovenly husband.

Women can now be just about anything they want. But no matter what else they do, they are supposed to meet an unrealistic aesthetic ideal.

Everyone wants to be attractive. In many ways, it makes life easier. Kids considered good-looking may be more likely to be popular in school, contributing to greater self-esteem. People deemed physically appealing are widely perceived to have an advantage, helping them to get ahead in life. Their prospects for personal and professional success are thought to be better than those of people regarded as homely. They often make a good impression the moment they walk through the door, before even opening their mouths. Many people believe in them and help them, in subtle and significant ways, to succeed.

There’s a crucial difference, though. For boys, attractiveness—whatever its measure—is simply an asset, whereas for many girls, it feels like a requisite for acknowledgment. Girls’ self-worth is more likely to be tied to their looks because people focus on females’ appearance more than males’. Boys are supposed to be strong, smart, brave, and even mischievous. Regardless of their looks, people tend to believe boys are innately capable and encourage them in their pursuits. But if girls are considered unattractive, their endeavors may be less likely to garner praise.

Childhood is the time neural networks fire most frequently, forming strong and lasting connections. Kids are highly sensitive to input from adults and peers, which informs their understanding of themselves. When children are overlooked, they internalize a sense of inadequacy, which can hold them back from achieving—or even setting—goals. The belief in their own deficiency then becomes a self-fulfilling prophecy, “proving” they are not valuable.

Some may prefer to think we are past this disparity, but girls are often still prized more for being “pretty” than for any other quality. Often without even realizing it, people evaluate a woman’s exterior before attempting to discern any personal characteristics. Commentary from both sexes about female appearance is far more frequent and critical than remarks about those of their male counterparts. We have been conditioned to judge a woman on her appearance prior to learning anything else about her. If a woman is considered unattractive, her importance may be dismissed unless she offers some exceptional contribution to society, whereas men are believed to have inherent merit regardless of their looks.

Emphasis on appearance takes a special toll on young women developing their sense of identity. Kids are impressionable. Every waking moment, without conscious effort, they take in overt and veiled messages. They quickly begin to notice patterns that teach them to distinguish desirable from inferior. Their sophisticated brains translate these observations into meaning, which shapes their perception of themselves vis-à-vis how they measure up to the paradigm.

In a culture focused on the importance of women’s sex appeal, how do we produce girls who are self-assured, no matter how they look? We can’t raise them just like boys, because society treats them differently.

Kylie Jenner epitomizes the compulsion girls feel to be deemed attractive and the measures they will take to achieve it. Her family began filming a popular reality television show when Kylie was only 9 years old, making her the subject of public scrutiny and inviting comparison to her older sisters, Kim Kardashian et al., known mostly for their looks. Kylie was a relatably natural-looking girl, but as she grew, she did not conform to the glamour-puss aesthetic her sisters cultivated and monetized. As a teen, she struggled with self-esteem and turned to plastic surgery to improve her confidence.

Emphasis on appearance takes a special toll on young women developing their sense of identity. Kids are impressionable. Every waking moment, without conscious effort, they take in overt and veiled messages. They quickly begin to notice patterns that teach them to distinguish desirable from inferior.

And it seems to have worked—at least superficially. She boasts the largest social media presence in her family, posting pictures of herself with professional hair and makeup … and often little clothing. Much of her current look is artificial, from hair and eyelash extensions to beauty enhancements that make her lips fuller and her cheekbones more pronounced to procedures that make her body curvier. Jenner’s physical transformation helped her become a beauty industry mogul, with a makeup line that flies off the shelves and endorsements that pay her obscene amounts of money for one Instagram post of her modeling the product. Millions of adoring fans, particularly young girls, look up to her and follow her every exceedingly documented move.

Her disquieting message? If you can change your looks enough through any means necessary, you too can feel good about yourself and have an enviable life.

We need to change the message. Who you are is more important than how you look. But it’s not enough to pay lip service to this idea. Before girls inevitably start worrying about cellulite or thick ankles or small breasts, parents need to tell them how valuable they are because of all of their internal qualities, and focus on these rather than how “cute” or “pretty” they look. It is up to you to counterbalance the pressure they feel simply by existing in this world to look a certain way.

When you talk about women, notice how often you comment on their appearance. Mothers, do you criticize your own looks in front of your daughters? I’ll bet their fathers don’t casually call themselves fat or analyze their flaws in front of the mirror. Kids become socialized to do what they observe, and if they are around women who tear themselves down, they will learn it is appropriate to disparage themselves.

Teach girls their bodies are extraordinary vehicles that allow them to do all the activities they enjoy. It is important to eat a nutritious diet and exercise so they can live long, healthy, full lives. It is not their job to contort themselves into svelte, “sexy” creatures to captivate the interest of boys and be validated as worthwhile human beings.

When they demonstrate wit, assertiveness, or compassion, make a point to acknowledge it. If they focus on external qualities like Selena Gomez’s hair or clothes, ask what they like about her character. If necessary, redirect them by discussing the creativity of her lyrics or her strength for openly sharing her mental and physical health struggles with vulnerability.

Help them choose women they admire for who they are on the inside rather than for how they look. It isn’t wrong for them to notice appearance, but they need to know it is far from a woman’s most important quality.

Boys are raised to think they can do anything. Girls more frequently struggle to access belief in themselves. Let them know they can be anyone they want if they pursue their passions. Share that there have been many standards of beauty across eras and cultures and that there is no mold or magic formula for attractiveness. Reinforce that their unique attributes—their constellation of birthmarks or their enormous smile when they are having fun—are what make them spectacular on the outside, while their true beauty radiates from within.

Offer your daughters a secure appreciation of their intrinsic value so they do not seek it in our society’s still-misogynistic way of reducing women to their physicality. Even if they do receive positive reinforcement for their looks, it is a flimsy form of validation requiring constant upkeep. True confidence comes from having a stable sense of self-worth, not from looking like a Victoria’s Secret model.