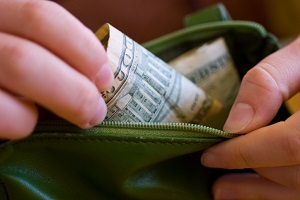 With all of our tax returns due in April, the subject of money—what we make and how we spend it—has been on many of our minds. It’s never far away, of course. Managing our resources is one of the most important life skills we will ever have. And with the realities of this last recession—bank failures, job losses, upside down mortgages, and eviscerated pension plans—money and financial issues have been on our minds more than ever.

Since money is the way our society exchanges resources (that nice, new pair of sneakers for this small group of green paper bills, for example), we need money to live. It’s right up there with health, good relationships, food, and shelter. We can’t get along without it; at least, ours or someone else’s who is willing to share.

Since it’s such an important facet of our lives, money develops a huge, complex meaning in our daily thoughts and behaviors. How we make money, spend money, save money, share money, waste money, and value money are parts of who we are as families and individuals. Consider how complex meanings are, in your family, around issues of money; and now think about how that same complexity is in other families. Now consider just that one aspect of getting married—each person a product of each differently focused family. No wonder couples who come to family therapy report that money decisions and problems are among the most contentious aspects of their marriage.

If the process of making, keeping, and spending money is such a vital piece of being a family, what do we know about making that issue easier, as a family?

We live in a diverse culture, with wide differences in income and spending patterns. It’s impossible not to compare ourselves with others. Happier families work against that tendency and strive to live within their means, focusing not on what’s missing, but on gratitude for what they have. With a good deal of planning, lots of discussion and negotiation, as well as unending effort, even this huge life process can be done well, with less anxiety and continuing stability.