How Can We Help Stop Child Sexual Abuse? Acknowledge Its Existence 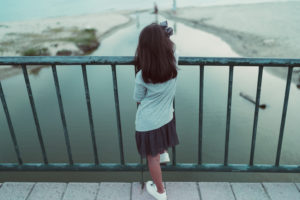 Editor’s Note: This article contains content about child sexual abuse that may be disturbing or triggering for some readers.

If you or someone you know has experienced sexual abuse of any kind, we encourage you to reach out to a qualified, compassionate therapist for support.

“Uncle, uncle!” A young girl of 7 years called out from the huge counter of a superstore. It was an extremely hot summer afternoon. Her love for jelly, and some spare change from her elder sister, had brought her to the store. She knew if her mother had been home she wouldn’t have been allowed to walk to the shop on her own, let alone enter it. As a little girl, she was strictly prohibited from going anywhere without someone accompanying her.

“Jee, aj akele?” (Yes, alone today?) The man behind the counter stood on his toes to see who had called his name.

“Mujhe jelly chaiye.” (I want jellies.) She said, handing him some change she had.

“Koi bhi dedain, mujhe dikh nahi raha,” (Any one, since I cannot see), she said, standing on her toes to try and catch a glimpse of the jellies.

“Andar aaker dekhlo.” (Come inside and have a look.)

The girl stepped behind the counter, pointing, with a toothless grin, at a few of her favorite jellies.

The shopkeeper told her the things she had pointed out were worth 20 rupees, but she had only given him 15 rupees.

Disappointed, the girl chose the jelly she’d give up.

The shopkeeper, who knew her father and elder brothers, said he would give her the item for free—if she gave him something in return.

“Kia?” (What?) The girl asked with curiosity.

“Mujhe kiss kerni paregi.” (You would have to give me a kiss)

This seemed like an easy task to perform in exchange for a jelly. The little girl moved forward to kiss the man on cheek, but he stopped her, saying said he had changed his mind. He moved forward and touched her chest. The girl felt strange, though she didn’t know why. The man then scooped her up and touched her in a private place. She didn’t say anything, but she felt a tear leave her eye. Now she didn’t want the jelly or the money. She wanted to go home. She wanted someone to come to the shop and buy something so this man would leave her alone. He had always been so kind when she came to the shop with her father, but suddenly he had become a monster. She couldn’t understand his behavior and had no explanation for it, since she had never experienced anything like it.

She felt more tears leave her eyes, but he didn’t stop, though he kept looking outside. His hands ran over her body, down behind the counter where she was hidden from sight, so no one passing by could see a thing. No one could see her innocence being destroyed.

Her family had always taken loving care of her. Her parents always made sure she had a smile on her face and innocence in her eyes. But now she had lost that innocence for a 5-rupee jelly. She whimpered. Maybe he thought she was about to shout or cry loudly, but whatever he thought, he finally stopped. The moment he stopped, the girl left her jellies and her money and ran back home, as fast as could.

Her sister, seven years older, didn’t notice anything different, and the little girl was afraid to tell. She worried that if she told her mother, she would be scolded for going out alone. She wasn’t sure what had happened to her, whether it was something that was supposed to be good or bad. She wasn’t old enough to know and had never told by anyone that being touched down there was wrong. All she knew was that it hadn’t felt right.

The topic was never discussed in her house, and she was not warned about the dangers of what she had already experienced until she was 12 years old. By then, however, she knew exactly why her parents had prohibited her from going out alone, though she never told anyone what had happened to her. She never told her parents, even when they warned her of certain “inappropriate” dangers, that she went out to get jellies alone one day and left the money in the shop, or why. She told her sister she had dropped the money and her sister believed her, and no one ever discovered what had happened to her.

At the age of 12, she was told that girls were not allowed to be touched down there and realized that what had happened to her years earlier was wrong. When she found out it was inappropriate, she realized why what the shopkeeper had done had made her cry and feel bad. But even still, she wasn’t given a chance to tell anyone. She wasn’t asked whether she had ever experienced anything like that, so she never said a word. And because she never said a word, no one was able to tell her it was okay, hug her, or help calm her down. All she was told was that girls should not be touched, but since she had already been touched in that way, she only felt stained, and already broken. And since she knew she was supposed to be perfectly clean and unstained, she remained quiet.

When she was 21 years old, she found out that the “inappropriate” touch she had experienced was actually an instance of sexual abuse. This made her feel angry. Broken. As if she wasn’t good enough to be with someone.

For the past four years, whenever I spend time with members of my immediate or extended family who are parents of young children, I specifically request them to talk to their children about being touched in inappropriate ways. I urge them to fully discuss this issue with their children, to be clear, to explain abuse so the children understand what it means and what they should do if someone tries to touch them.

I urge all parents not to be shy with their children, to point to parts of the child’s body and tell the child that no one, not even a family member, should touch them there. The conversation may be difficult, but it can prevent harm. A child who doesn’t know what abuse is, who is frightened of the person who has abused them, or is scared into silence because they think they have done something wrong may never tell anyone what happened to them. When parents talk about abuse, in age-appropriate terms, they can break down the wall of silence before it is built. Parents who talk to their children about abuse can also encourage them to talk about it if anyone makes them feel uncomfortable or bad.

Every day I wish my parents had not been too shy to tell me this. But because I can’t change the past, I want to do what I can to prevent others from experiencing the same pain, from having to keep the same secret I have kept for so long.

F.S., an average girl from a middle-class family in Pakistan. is currently working to establish a daycare center for children aged between 1 month and 8 years, with a goal of helping them develop strong cultural, social and ethical skills.