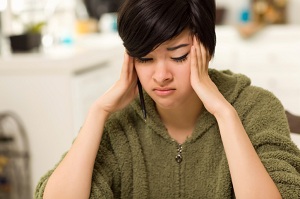 Sometimes, when people experience a terrible loss, especially if it’s a traumatic loss, they make a life-changing decision in the middle of the intense emotional pain. Such decisions are made often without even realizing it or remembering it. This decision can potentially affect them for the rest of their lives, and can cause chronic depression. People do this to cope with the loss.

In the shock of loss, people focus very narrowly on getting through each excruciating moment. Thoughts like, “I’ll never love again,”or, “I’ll never trust again,” seem at the time like ways to avoid ever feeling this unbearable pain again. When people are free of acute pain and are able to let other experiences guide them, they usually do not make these kinds of grief-driven decisions. The following examples illustrate two situations where grief-driven decisions originated and their consequences several years after.

Grief from Childhood
Chris, an 8 year-old girl, is being raised by a father who beats her when he is drunk and frustrated with his life. He also blames her for causing him to do it. Her mother is afraid of him, so she does not stop him. Her grandmother lives next door. Sometimes Chris can escape her father and run to her grandmother’s house. Most of the time, her father does not follow her. In this time, he gets a chance to cool down and sober up before she returns. If he does follow her, her grandmother protects and defends her until he gives up.

When her grandmother dies, Chris is overwhelmed with grief and fear. Whether in actual words or not, she says to herself, “I’ll never be safe again.” Within a few days, she has her first panic attack. She has frightening dreams about being chased. No one is helping her with her feelings of fear, sadness, and anger about her family.

At 20, her life consists of living with her parents on a powder keg of intense, unresolved anger and sadness she never considers. She goes out to school, but is afraid to trust men or even get close to women. She is lonely, feels helpless to change anything for the better, still has panic attacks and sees no point to living.

Of course how her parents treated her caused a great deal of her pain. But before her grandmother died, she had a sense that she had the power to keep herself safe and that safety existed in the world. Losing those two beliefs when she lost her only source for them caused her to make this decision that she would never be safe. That decision led to her creating a life that did not feel worth living.

If she realized she made that decision, and gained new perspective, she could see that the danger came from her father when she was a child, helpless to protect herself. A change in perspective on past trauma often takes some Eye Movement Desensitization and Reprogramming (EMDR) trauma therapy.

After her realization, it would be more apparent that she now has many resources she lacked back then. She can get away from her father, and she can make herself safe. The fear is about what happened in the past and about a situation she will never be in again, father than about her present or future. Traumatic grief-driven decisions stay locked in, as if time had never passed and nothing had changed.

Loss in Adult Life
Another example would be a woman in her 30s whose beloved husband dies. In her grief, she decides, somewhat unconsciously, that she will never love again. Smaller decisions go with it, establishing that she will not risk being heartbroken again and that she will honor their love by never loving anyone else. Again, she may forget or not even realize she made this decision.

Five years later, her life may be going well in other ways, but she is lonely. No one she dates ever turns out to be a serious partner. She may believe she will never find anyone, and become depressed about being alone the rest of her life.

She doesn’t know how to understand why she hasn’t been able to find a relationship, unless it’s because she’s unlovable. This conclusion depresses her further. She has not realized that she’s been rejecting every man she meets because the decision she made at the peak of her grief is lodged inside. Her decision keeps her from seriously considering anyone as a partner.

If she can see that she made these decisions when she lost her husband, she can reconsider whether she wants to stay committed to them, or would rather make different decisions at this point in her life. If the loss was traumatic, she may need some therapy to get the message of the new decision to the traumatized part of her brain. But once it gets there, she will be free to love again.

Healing Involves Making New Decisions
If you have had a major loss any time in your life, try going back in your mind to what you might have decided in your intense grief. These decisions can be uncovered and re-made. Then we can begin to change the direction our lives are going to match the new decision.