GoodTherapy Participates in 2019 Out of the Darkness Walk 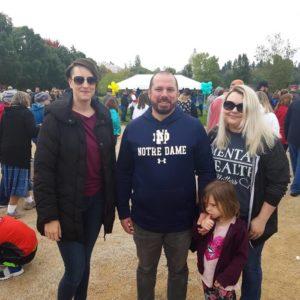 On a brisk October Saturday morning at Marathon Park in Olympia, Washington, GoodTherapy team members participated in the American Foundation for Suicide Prevention’s (AFSP) annual Out of the Darkness Walk to raise awareness and funds for suicide prevention for the sixth consecutive year. Over 700 participants attended Olympia’s walk. Nationally, there have been 425 walks in 2019.

Suicide prevention is more important now than ever. According to the World Health Organization (WHO), someone dies by suicide every 40 seconds. Within the United States, suicide is the tenth leading cause of death, and among individuals age 10 through 34, it is the second leading cause of death. White males have the highest rates of suicide, making up nearly 70% of deaths by suicide in 2017. Furthermore, the national annual suicide rate reached a record high in 2017, leaping to 14 deaths per every 100,000 people.

When asked why she found it important to participate in the walk, Lindsay Tompkins of GoodTherapy’s Support Team explained, “This was my fifth time participating in the Out of the Darkness Walk. This year was especially difficult after losing a very close family friend in February. It is so important for people out there to know they are not alone and that it is okay to ask for help. Reducing the stigma around mental illness and supporting resources that bring forward awareness is essential to preventing suicide.”

Suicide prevention comprises a variety of efforts, including public awareness and education, research, and support for individuals directly affected.

The American Foundation for Suicide Prevention has set the goal to reduce the national suicide rate 20% by 2025. AFSP’s Out of the Darkness Walks began nationally in 2004, and the campaign has grown exponentially in scope since then. The walks are now AFSP’s biggest event of the year.

Participants used the hashtag #OutoftheDarkness on social media to help spread the word about the walk, suicide awareness and prevention efforts, and fundraising. The GoodTherapy team raised over $900 for suicide prevention, and the Olympia event has raised a total of $44,703 for AFSP’s cause so far. Donations are still being accepted through the end of 2019. If you would like to make a donation to AFSP with GoodTherapy, you can still do so here.

Part of GoodTherapy’s mission is to educate the public about mental health and reduce stigma surrounding mental health and issues that bring people to therapy, including death by suicide and attempted suicide. By attending the walk each year, members of the GoodTherapy team hope to help normalize the discussion of suicide and suicidal ideation in order to foster a sense of safety and security around seeking help for suicidality.

If you or a loved one feels suicidal, know that options and help are available. Reach out to a crisis line such as the National Suicide Prevention Lifeline at 1-800-273-8255 (TTY: 1-800-799-4TTY) or text HOME to the National Crisis Text Line at 741741. You can also view more crisis resources here.