Gay Marriage: A Shift in Perspective 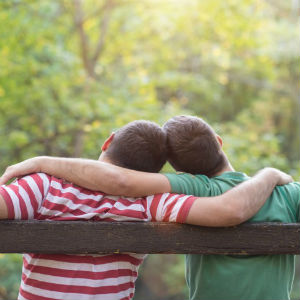 The past year has been a notable one for states reconsidering their stance on gay marriage, with some welcoming it while others continue their battle to shut out the LGBT community. Change has come through activism, court mandates, and legislation, but there may still be room for change to also occur in the manner in which we live and pursue our lives.

As a recently married gay man, I am fascinated by the internal and external journey that I am taking as I shift myself into this new form of self-identity. As someone who survived the eighties, I grew up in a world where the possibility of marrying the man I loved was not even a possibility. As I matured and looked to create connection, I was in two long-term relationships (10 and seven years), but even in the course of those partnerships the depth and commitment of marriage was not an option.

On June 28, 2013, that all changed. Suddenly it was OK in the state of California for my partner of 12 years and I to get married. This was and is exciting news, and on November 1 of last year we jumped the broom and got married. For us, this was simply recognition of the journey we have taken thus far and a commitment to the path ahead.

As comfortable and ecstatic as I am with our nuptials, I have been observing the varied and distinct reactions we have received from family, friends, and the community. For the most part, we have been welcomed with open arms and hearts, yet even in the middle of these warm receptions, there have been some challenges with the full acceptance, understanding, and recognition of our marriage.

One of the first experiences with this was immediately following our wedding, when well-meaning relatives made the statement, “Well, now you are really a part of the family.” Knowing the people who said this, I know that it was a heartfelt welcoming statement, yet at the same time it raised the question of the legitimacy of the previous 12 years that my partner and I had been together. Were all of the family gatherings we hosted, the weddings and funerals we attended, and the intimate conversations we had over family issues simply less than because we were a gay couple and now we could prove that we had legitimacy by being officially married?

Also, when we check into a hotel as two men, why is there always a suggestion that we require two beds? We are more than open about stating that we are married, but this question is not one I normally witness heterosexual couples having to go through when they are checking in at the same front desk.

A very recent occurrence happened at the airport during our return from a trip out of the country. As we were landing and the customs slips were handed out for us to declare any items we were bringing back into the country, the instructions were given very clearly to fill out one form per family, which we did. Arriving at the customs kiosk, my partner stepped up first with the form and I joined him a few seconds later, dragging up the rest of our luggage. The customs officer said, “What’s this?” whereupon we had to once again state that we were married and clarify the relationship. After a few moments of awkward mumbling, the officer processed our papers and sent us on our way. No other families or couples had this happen during the process.

These small incidents add up to a new level of understanding that needs to be developed between the heterosexual and homosexual communities. Perhaps a shift in assumptions and language can help to normalize how any and all couples are treated by society. These moments, seemingly small and innocuous, add up to a sense of feeling ostracized and awkward in daily life even as the large battles are being won state by state and in the Supreme Court.

Am I angry about these transgressions? Not really. But for me, they point out how the work of educating people on the concept of same-sex marriage is not finished, even in the places where LGBT marriage is now legal. Perhaps I need to accept the role of educator and pioneer in this process. I invite you to also examine your own beliefs and language as you begin to interact with married couples who are part of the LGBT community.