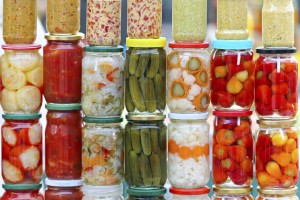 Though mental health treatment has historically focused on the mind, researchers are increasingly exploring the connection between mind and body. Several recent studies have uncovered a link between gut health and emotional wellness. In one such study, researchers found that gut bacteria that escapes the gut—leading to a so-called leaky gut—may lead to depression. Now, scientists have turned their attention to social anxiety in young adults. A study published in Psychiatry Research suggests that fermented foods, which contain large quantities of probiotics, may help ease anxiety.

Researchers administered a questionnaire to about 700 students taking Introduction to Psychology courses at The College of William and Mary. Students answered questions about their consumption of fermented foods. Researchers also asked them about their consumption of fruits and vegetables so that they could control for healthy eating habits. Because the questionnaire was administered as part of a mass testing tool, it is unlikely the students were able to discern what was being tested.

Students who ate more fermented foods had less social anxiety. Among those who researchers labeled as high on “neuroticism,” the correlation was strongest. This suggests that fermented foods can be especially beneficial for those already vulnerable to anxiety. The study’s authors believe this may be because fermented foods are often high in probiotics, which help to counteract damaging bacteria and ensure a healthy gut.

The study is correlational in nature, so it does not prove that fermented foods treat anxiety. It could be, for example, that people with lower levels of social anxiety tend to eat more fermented foods. To test the ability of fermented foods to treat anxiety, researchers plan to develop an experimental version of their study. Previous research on animals has suggested a causal relation between probiotic consumption and lower anxiety.

The study also found that exercise correlated with a reduction in social anxiety.