An Emotional Wild West: What We’re Missing on Social Media 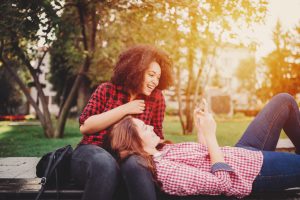 I don’t know about you, but my social media newsfeed is an increasingly conflict-ridden place these days. If I’m being frank, it makes me think of the HBO series Westworld. If you aren’t familiar with the show’s premise, Westworld is a corporate “wild west” theme park inhabited by semi-sentient androids known as hosts. Ultra-rich humans, referred to as guests, pay exorbitant fees to dissociate from the unbending rules and responsibilities of the real world.

Have social media become our own version of Westworld playing out before our eyes?

Once a place of retreat and distraction—a virtual world somewhat sandboxed from the real world—social media have evolved into their own reality: an increasing number of users commenting and emoting seemingly without boundaries or recognition of real-world consequences. Worse, social media users often treat those with whom they disagree as less than or in ways they never would, at least outwardly, under normal circumstances. Why is this happening?

There are a lot of terms floating around that describe this phenomenon, such as the online disinhibition effect, diffusion of responsibility, and deindividuation, to name a few. But these terms tend to minimize the role of individual responsibility and emphasize the broader social context as being the root cause of the observed behavior. Call me idealistic, or maybe it’s the values I’ve cultivated in the helping profession, but I continue to believe our ability to make conscious choices overpowers any given social construct.

What I’m most interested in from a therapeutic standpoint, however, is how social media habits are impacting people on an individual level. Eager to find out, I posted an anonymous online survey on the topic. Here’s a sampling of the questions posed, all of which were adapted from the acceptance and commitment therapy (ACT) matrix, developed by Dr. Kevin Polk:

1. What motivates you to use social media, or what value does it hold for you?

As you might expect, most respondents reported that keeping up with and staying connected to friends and family was the most important aspect of social media. For a sizable minority, however, social media had become a way to follow prominent figures and current events. We’ve all watched social media’s gradual but relentless expansion into the traditional news and entertainment space. The previously segregated worlds of social connection on one hand, and political and cultural discourse on the other, are now integrating in a virtual space largely devoid of social convention or clear interpersonal boundaries.

2. What unwanted emotions show up when using social media?

Nearly all of those who partook in the survey identified anger and sadness as common responses to social media use. Apart from the vicious cycle of negativity this tends to promote, what was also interesting about these emotional responses was that some of the dissatisfaction seemed to stem from the fact a treasured distraction had been corrupted or taken away. I got the sense a lot of users felt bitterness about the changing nature of social media—a bitterness roughly analogous to how you might feel if, during a lovely Thanksgiving dinner with family, Uncle Larry were to bring up politics and ruin the vibe.

3. What do you do behaviorally when those unwanted emotions show up?

Behavioral reactions to unwanted emotions fell somewhere along a spectrum ranging from avoidance of the source of discomfort to confrontational attempts to change another person’s views. We’ve all seen those threads with hundreds of comments that inevitably end in a standoff. No minds changed, only hardened.

Perhaps the valuable insight here is that, even though those same people may appear to enjoy the public sparring so commonplace on social media, they are nevertheless acutely aware of how counterproductive it often is.

Not surprisingly, then, those who described their behaviors as working well for them overall were also the ones who avoided engaging in hostile exchanges. Those who did engage reported feeling more drained than gratified.

Perhaps the valuable insight here is that, even though those same people may appear to enjoy the public sparring so commonplace on social media, they are nevertheless acutely aware of how counterproductive it often is.

4. What behaviors could you use on social media that are reflective of your values?

For a few respondents, this question seemed to incite a sense of hopelessness. It appears those who were unable to generate alternative behaviors could envision only one path to better reflect their values—continuing to express their point of view. Given that feeling heard is a basic human need, it is understandable how the focus might be aimed at developing strategies to better achieve this. However, focusing a significant amount of time and energy communicating personal views, especially when met with opposition, was not found to be effective or rewarding.

The remaining respondents identified a variety of valued actions, such as: sharing only positive, funny, or non-political posts; not engaging in hostile exchanges or power struggles; taking regular social media breaks to limit exposure; and curating news sources not directly linked to social media. The takeaway here seems to be that shifting the focus to things you can change generally feels more empowering and satisfying.

Social media are tools that can either facilitate connection or enhance division. The ultimate choice lies with the individual—the choice to either utilize those tools in accordance with their values or to get caught up in the illusion the virtual world of social media is a consequence-free environment.

Pausing for a moment of self-reflection, especially in a time of palpable polarization, can pay great dividends. Actions will always speak louder than words. If you don’t like what’s happening on social media, don’t give them your attention. Instead, focus on what is under your control. Act mindfully. Like Dolores in Westworld, choose to see the beauty.