The Emotional Lives of Elephants 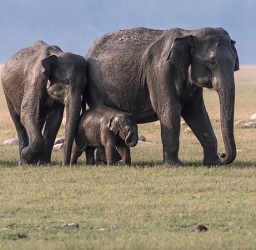 Raju, an Indian elephant, was taken from his family by poachers 50 years ago. If you’re an animal lover, you might already have seen the images in the video where Raju appears to cry tears of joy after being released to the Elephant Conservation and Care Centre. After years of physical abuse, Raju transitioned from a life in spiked shackles to one with a new family.

Whether elephants can cry remains a subject of scientific and philosophical debate. There’s no doubt that elephants, like most mammals, can produce tears to clean and protect their eyes, and Raju’s apparent tears in the video make it quite clear that he’s capable of crying. The real question is whether elephants’ tears reflect emotions or are simply an attempt to keep their eyes clean. We can’t ask elephants directly whether their tears are the result of emotions, which makes it nearly impossible to scientifically prove that elephants cry in response to strong emotions. Elephants’ complex emotional lives and rich social bonds, though, suggest that they have the emotional capacity to cry in response to emotional events.

An emotion is a subjective experience, making it incredibly difficult to scientifically prove. Elephants live in large social groups, which means they may need complex social skills and strong emotional attachments to maintain group unity. There’s plenty of circumstantial evidence that elephants have complex emotional lives, including:

While it may not be possible to prove that Raju the elephant cried tears of joy, it certainly seems likely that he did. Raju is reportedly adjusting well to his new life at the Elephant Conservation and Care Centre, though he is still very wary of humans. On the evening of his arrival, Raju was introduced to Phoolkali, a female elephant who was rescued two years ago after she was found in an abandoned warehouse, and she shared her snack of fruit with Raju.