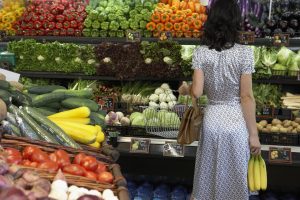 Arrows directing people toward healthy food in grocery stores—a real-life version of emojis—can help people make healthier choices, according to a study published in the Journal of Nutrition Education and Behavior.

Researchers collected data from two grocery stores, both parts of the same chain, on customer shopping habits for two weeks. The stores were in places with similar demographics, including a poverty level of 33-44%.

At the end of the initial two-week period, the team erected signs designed to direct customers to healthy food options in one of the stores, while the second store acted as a control. The signs featured smiley face emojis giving a thumbs-up and arrows. “Follow green arrow for a healthy heart” and “Follow the green arrow for health” were among the signs’ captions.

At the store that featured these signs, shoppers bought 8% more produce than usual. They did not increase spending on other food, suggesting the signs had a direct influence on purchasing behavior.

In a second experiment, the researchers placed the signs in two grocery stores with different demographics from the original stores. The second group of stores had a lower poverty level of 13-18%. This time, researchers gathered data on baseline shopper behavior for 96 and 123 days. Within 19-25 days, shoppers had increased produce spending by as much as 15%.

The researchers say these simple graphics may encourage shoppers across demographic groups and income levels to make healthier purchasing decisions because the emojis serve as a sign of social approval. The study did not assess whether shoppers actually ate the additional produce they purchased.