The Price of Gold: Eating Disorders and the Increased Risk for Athletes 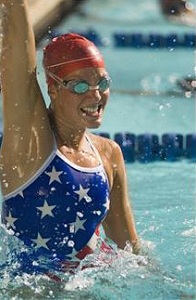 The Olympics are at the forefront of many people’s minds right now, but lingering behind the competition is a darker issue. Many professional athletes are currently struggling with eating disorders and other mental health issues, and a few of these athletes have even come forward to bring awareness to this growing issue.

Hollie Avil, a triathlete, was headed for the London 2012 Olympics, but according to her story in The Telegraph, she halted her professional athletic career to recover from her eating disorder. She distinctly remembers what triggered her eating disorder in 2006—a coach telling her that she needed to lose weight. This started her obsession with food and losing weight, which eventually led to depression and her decision to take a different path in life. She now wants to create a charity to assist young female athletes who have eating disorders, because she believes eating disorders are prevalent in triathlons and other sports.

Another Olympic athlete has been in the spotlight for her performance and for her eating disorder. Brittany Viola, a diver, developed the eating disorder bulimia when she was 15 years old and had to stay in the hospital to overcome it, according to a Reuters article. She said her struggle with bulimia was caused by her weight concerns—she thought she needed to have a different body type for diving but was finally able to love her body the way it was made.

Although these two athletes realized they had a problem and were able to get treatment for it before it completely ruined their lives, others are not always as fortunate. Douglas Bunnell, vice president of The Renfrew Center Foundation, offers information about the issue of eating disorders for athletes, and how to prevent and detect this problem. The Renfrew Center was established as the first residential eating disorder facility in the United States.

Bunnell wants to make an important distinction between strict eating habits and eating disorders when trying to identify any problems in athletes: “It’s important to stress that eating disorders and disordered eating refer not only to behaviors but also to the psychological aspects of the eating behavior,” Bunnell said in an email interview. He went on  to say, “Restricted eating in the service of, say, a religious goal is not an eating disordered. Eating very carefully in the service of athletic performance is not by itself diagnostic. What matters is intent, at least for adolescents and adults. Is there a clear dissatisfaction with body image or a clear intent to lose weight or avoid weigh gain? Is there a fear of fatness? Is the individual’s self-esteem unduly influenced by body image? You need to consider more than just the eating behavior.”

He said that female athletes are more likely to suffer from health problems like amenorrhea—the absence of a menstrual cycle—than women in the general public, and tend to restrict their eating and exercise excessively.

“Not everyone like this has an eating disorder, however,” Bunnell said. “Sports with weight limits, revealing uniforms (like beach volleyball), and where scores are based on form have higher rates of body image issues and eating disorders. Exercise and perfectionism can be risk factors for eating disorders, so presumably any number of athletes, male or female, at this high level of competition and motivation are at an increased risk, but it doesn’t necessarily cause an eating disorder.”

He said there is a major need to instruct parents, coaches, organizations, and athletes about the nature of eating disorders, including the risks, identification, prevention, and treatment.

Parents often still have a major role in their athletes’ lives, so it’s important for them to take steps to look for any warning signs of eating disorders. Parents can help prevent eating disorder development by tagging along occasionally during practices to make sure the training methods are healthy, Bunnell said. Parents can also promote positive body talk and reinforce healthy nutrition habits, among other things. Coaches can also play a major role in eating disorder prevention, especially by focusing less on weight and more on other areas involved in performance.

Ten warning signs of eating disorders, provided by Bunnell via a press release, that parents and coaches should be aware of include:

The Renfrew Center has treated patients with eating disorders who are athletes. One former patient shared her experiences with anorexia, although due to the sensitive nature of her struggles, she did not want to be named. This 21-year-old woman was a softball player for 14 years and a volleyball player for 8 years. “I developed anorexia nervosa at age 16, and the main symptoms I struggled with were restriction and over-exercise,” she said. “I engaged in food-ritualized eating and self-harmed fairly regularly as well.”

Her eating disorder worsened after she experienced a chronic injury from softball, leaving her incapable of competing in the future. “Losing softball mirrored the melodramatic scene in nauseatingly predictable films when the protagonist freezes as the cab pulls away and the love of her life is ensconced in the backseat with a one-way ticket elsewhere,” she said. “She stands left with nothing but words unspoken, an empty hand, and a heart without song. I had nothing; I was no one; or so I thought. I lost my focus and my identity. It was depressing. As I was upset about softball and losing my future at the collegiate level, anorexia stepped on the scene.”

“Anorexia gave me something to obsess over and focus on as my softball thoughts dissipated, and it protected me from dealing with the devastation,” she added. “Other things that contributed to my eating disorder were particular traits that are beginning to be considered as endophenotypes—perfectionism, cognitive rigidity, etc. In addition to these, I also had a genetic predisposition to developing an eating disorder.”

She recalls that during her athletic run, engaging in disordered eating behaviors harmed her athletic performance. “Women who play sports while [experiencing] symptoms aren’t athletes,” she said. “They are women with eating disorders, and their sport of choice is just another symptom. When you develop an eating disorder, you won’t be able to separate the two. Game over.”

Although she still struggles with thoughts associated with her eating disorder every day—such as feeling fat—she has come a long way in recovery with the help of a team of professionals. “Over time, I realized that I was alive to serve a purpose that did not involve starving myself,” she added.

Her struggle was long and full of conflict. She said she resisted help for the longest time, denying her eating disorder, and felt her family and friends did not understand her. There were times where she refused to talk to anyone, wouldn’t listen to the advice she was given by her therapist and others, and even “flaunted” her “noncompliance.” But she also had times where she knew she wanted to get beyond her disorder, and these small moments added up in the end.

“The fight was in no way picturesque or anything that I’d want to do over,” she said. “Healing isn’t simple and it isn’t pretty. Oftentimes, the healing, the small, subtle victories felt painful and were challenging, but in the long term, the fight proved itself worthwhile. The victories were pixels; a smaller part of a larger picture. That larger picture, that picture being a life. A life that provides room for grief, for relief, for misery, for joy, for edification, for actualization. Room for life in its totality, as it is meant to be experienced.”