The Dunning-Kruger Effect: How Being Wrong Feels So Right 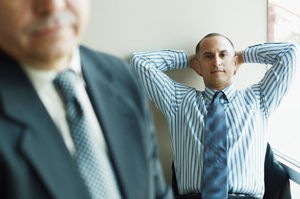 Anyone who’s ever witnessed a debate between friends has probably watched people confidently assert things that are untrue. If you’ve ever tried to correct an untrue assumption, you’ve probably witnessed confidence turn to arrogance or aggression, then wondered why it is that people tend to get more entrenched when they’re shown to be wrong.

This phenomenon isn’t just an unpleasant side effect of hard-headedness, though. It may actually be the result of a cognitive bias, called the Dunning-Kruger effect, that colors the perceptions of people when they’re wrong.

The central argument of the Dunning-Kruger effect—named after David Dunning and Justin Kruger of Cornell University—is that incompetent people don’t know enough to know what they don’t know. Consequently, they’re more likely to overestimate their own competence. If you’ve ever taken a test and felt confident, only to find that you bombed it, you’ve experienced the Dunning-Kruger effect. It can happen to anyone—no one knows everything, and a key element of knowledge is knowing what you need to learn. A corollary of the theory is that highly competent people are more likely to underestimate their competence and performance.

Cognitive biases such as the Dunning-Kruger effect are subtle tricks the brain plays that can alter perception. In the case of competence, the Dunning-Kruger cognitive bias is enough to give anyone pause about whether he or she can accurately evaluate his or her own performance. But don’t worry. Cognitive biases don’t mean that you’re drifting aimlessly, never able to fully grasp what you don’t know. Instead, they provide a cautionary tale about the effects of inaccurate thinking. They also confirm that each of us is vulnerable to inflated egos and hubris—something everyone might want to consider next time they comment on a blog, post on Facebook, or get into an Internet-based flame war.

Effects of the Bias

There’s hope, though. Competence is largely a product of exposure and experience, and a formerly terrible math student can excel with the right tutoring. Dunning and Kruger have found that, when an incompetent person gains a new skill, he or she is finally able to recognize previous inadequacy—a process that might explain why so many people cringe when they look back on old journal entries.