Does Personality Change Under the Influence of Alcohol? 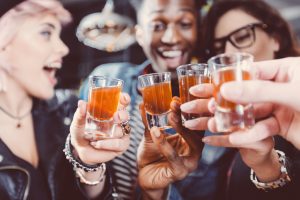 Many people tend to think drinking alcohol radically alters their personality, making them more social. Some people also rely on alcohol use to excuse behavior such as aggression. But according to research published in the journal Clinical Psychological Science, outside observers may not notice significant differences in personality when a person is under the influence of alcohol.

To test whether alcohol significantly changes personality, researchers recruited a group of 156 participants. The participants completed surveys about their “typical” and “drunk” personalities. The surveys used the five-factor model of personality, which includes measures of extroversion, agreeableness, openness to new experiences, conscientiousness, and emotional stability.

Two weeks later, researchers invited participants to a lab, along with a group of three or four friends. Participants took a breathalyzer test, and researchers measured their height and weight to assess the amount of alcohol necessary to induce a blood alcohol level of about 0.09. This level correlates with moderate intoxication, and exceeds the legal alcohol consumption limit when driving in all 50 states.

Observers gave the participants beverages, with half drinking Sprite only and the other half consuming Sprite and vodka cocktails. Fifteen minutes later, participants completed a range of activities, such as group discussion questions and logic puzzles.

Participants reported significant changes in all five dimensions of personality after drinking. They reported lower levels of agreeableness, openness, and conscientiousness, and higher levels of emotional stability and extroversion.

The study’s authors caution that it is unclear what caused the discrepancy in personality ratings. They suggest further research, particularly outside of a laboratory setting, is necessary to determine the effect of alcohol on personality. Further research could also shed light on strategies for reducing substance abuse and other negative outcomes associated with alcohol use.