Do the Hard Work Up Front: Tell Yourself the Truth 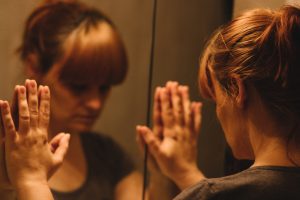 I’ve never lied to my kids. Sure, I’ve omitted some details and spared them information they aren’t able to understand at their young ages. And no, this doesn’t make me a better parent than anyone else—in fact, I’m sure my kids could have benefited at times from some good, old-fashioned scare tactics. But telling the truth—to others, but most importantly to yourself—is the fastest way to the life you want, and a crucial step in successful therapy.

Parenting can be exhausting, and telling some lies can make life seem so much easier in the short term. But when you start telling the truth, you do the hard work up front and spare yourself even harder moments in the future. For example, when you tell an unwelcome truth to children, it might result in a screaming fit or (often worse) having to bear their crushed expressions. But it’s way easier than all the little hedges and adjustments you will likely have to make later. Not only do you teach them the valuable lesson of coping with disappointment or anger, they learn to trust you, and they witness strength in the face of reality. The reality is life lets us down sometimes and kids scream and cry and sometimes parents are the bad guys. Try to get comfortable early on with the simple truth that one of the roles of a parent is to be the disappointer; you will save yourself the long-term problem of raising a child who looks to you to smooth everything out for them.

When we are adults, the little lies we’re told as children pave the way to what we call “magical thinking”—believing so strongly that something must be true that you miss the reality that it isn’t. I’ve sat with countless people who came to therapy to help keep themselves honest. They know they’re cheating themselves here or minimizing or exaggerating an obstacle there, and it’s a relief to have a therapist point that out.

“It sounds like you don’t get any work done at the library,” I remarked the other day to one student who visits me. “Why do you keep going there?” We laughed. “I’ve been telling myself and my parents for years that I only study at the library,” she said. “But really, that’s where I procrastinate before I do my actual best work late at night back in my room.”

A-ha. This person has good intentions but has been caught in a situation she knows doesn’t work and yet keeps telling herself it does. She’s at the library all day, so she must be getting work done.

When you can come clean with the truth behind some of your habits, you are in better control of them. At the very least, understanding them can help you offer yourself self-compassion for why you do them, which is key to changing approaches. For example, with this student, if she understands everyone needs to procrastinate sometimes, she can learn to not get down on herself about it and use her energy more constructively. She ended up procrastinating in other ways, and eventually the library served its purpose.

Telling yourself the truth means sobering up to your reality and doing the work up front to spare yourself a thousand tiny wounds later. This is especially difficult for people in abusive relationships, or with family members who experience addiction or mental health issues.

“I’m mostly happy with my life,” someone said to me once. “I just couldn’t imagine giving up my house and family life just because my husband is emotionally abusive sometimes.” After hearing about her “mostly pleasant” day-to-day family life, it was clear this person still had work to do.

When you start telling yourself the truth about your life, it is helpful to seek the support of a therapist or a compassionate friend or family member. Accepting truth can a humbling experience, and the immediate response must be self-compassion, which often requires some coaching.

“Tell me the truth,” I said to her one day. “Are you really happy with your life, or are you just getting moments of reprieve from walking on eggshells, and days when you’re not as wary of him as others? Can you actually feel close to someone who says these horrible things to you, no matter how mad he is?” This person had been telling herself half-truths, ones that she wanted desperately to believe but ultimately were not serving her.

We can tell ourselves the truth simply by listening to what others say to us. The woman above saw her marriage improve when she started to listen to the nasty things her husband said to her and stopped dismissing them as part of his angry moments. She learned to stand her ground and demand better treatment and insisted he find other ways to cope when he felt wronged.

Believing what you hear and see from others is important in dating contexts as well. “Tell me the truth,” I said again recently, this time to one of the “millennial”-aged people I work with in therapy. “If this girl was really into you, would she take another guy to her date party?” This young man was spared days or weeks of trying to make something happen with someone who didn’t see him the way he had hoped she might. Like the kids with crushed expressions, it was hard to swallow, but a faster track toward the next good thing to happen to him.

When you start telling yourself the truth about your life, it is helpful to seek the support of a therapist or a compassionate friend or family member. Accepting truth can a humbling experience, and the immediate response needs to be self-compassion, which often requires some coaching.

Think about what people tell you when something bad happens, and say the same things to yourself. “I can’t expect to be liked by everyone I’m attracted to,” said the young man above, who needed some support in dealing with rejection. “I’m not going to chase after someone trying to convince them we should date.”

Part of being a good therapist is drawing out a person’s truths without making them feel shame or guilt; instead, we provide structure and support to act on what they know. As parents, we need practice in the art of telling our kids the truth and handling the consequences with compassion for their feelings. As partners, we need to be honest about how we affect and are affected by our treatment of each other. As people, the better we get about acknowledging our reality, the more we can enjoy our lives.