Do Coffee Drinkers Live Longer? and Other News 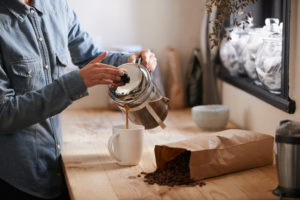 Two new studies suggest coffee drinkers may live longer. Research published in the journal Annals of Internal Medicine collected data on 521,330 Europeans over 16 years. Men with the highest levels of coffee consumption were 12% less likely than their peers to die during the follow-up period. Among women, high levels of coffee consumption were linked to a 7% reduction in the death rate.

People who drank coffee were overall less likely to die from digestive diseases and other health issues. Women coffee drinkers were also less likely to die of circulatory and cerebrovascular diseases. However, coffee was linked to an increased risk of death due to ovarian cancer, which partially explains the weaker correlation in women between coffee and a longer life.

The studies’ authors say much remains unknown about their findings. Researchers do not know why or how coffee reduces the risk of death, though they determined caffeine level was not significant, as the results were the same for those who drank decaffeinated coffee. For now, they say their findings at least suggest coffee is not harmful. For many, a morning cup of coffee increases pleasure and improves mood as well. Caffeine blocks adenosine receptors in the brain, and this block makes room for increased levels of dopamine, which is strongly linked with pleasure.

Why Sitting at Your Computer All Day Can Wipe You Out

Sitting at a computer all day at work might not seem as exhausting as a long workout or a day spent standing. Yet, people who spend their days gazing at computers often feel intense exhaustion. The culprit here is mental fatigue, which experts say can feel physical.

Language Development Starts in the Womb

According to a study that measured language-related changes in fetal heart rate, babies begin developing language skills at least a month before they are born. Researchers found American fetuses exhibited changes in their heart rate in response to hearing someone speak Japanese versus hearing someone speak in their native tongue of English. This suggests they can recognize the differences in sounds before their birth.

Teaching clinicians at sexual health clinics to ask about domestic violence could increase specialist referrals and access to services, according to a study of more than 4,300 women. Four percent of women at one clinic, and 7% at another, reported experiencing domestic abuse.

This is the Secret to Stop Your Nighttime Stress-Eating Habit, According to Science

Daytime work stress can cause overeating at night. According to two new studies, simply getting enough sleep at night can alleviate overeating due to work stress. Sleep helped whether stress was due to mistreatment by customers or to the high demands of the job.