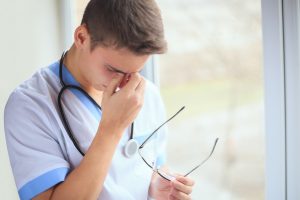 More than 27% of medical students have depression symptoms, according to a study published in the Journal of the American Medical Association (JAMA). This is significantly higher than the rate in the general population. According to the National Survey on Drug Use and Health, 6.7% of adults in the general population experienced depression in 2015.

Researchers have known about this higher-than-average rate of depression for more than a decade. With more research strengthening this finding, experts are now looking to find out if the high rate of depression is consistent through medical school and among established physicians.

The study’s authors point to the stressful, competitive nature of medical school as a potential cause of the high rate of depression among medical students. They suggest restructuring medical school programs, changing student evaluations, and increasing access to mental health services could reduce the depression rate.