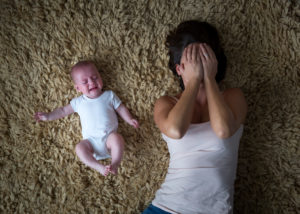 I have experience with postpartum mood issues, both personally and in working with individuals in my private practice. I’m well aware the condition is frequently misunderstood and underserved. Yet I was still appalled to learn, while recently watching the 2014 documentary Dark Side of the Full Moon, just how problematic the lack of resources and effective treatments for postpartum depression are.

Dark Side of the Full Moon details the mental health challenges that can come with motherhood. Not only does it shed light on the symptoms and manifestations of postpartum mood issues, it also addresses the serious absence in standards of care regarding these issues, despite their being so common following pregnancy and childbirth. Per the film, maternal mental health complications are the number one complication of childbirth, yet they are the ones most often underdiagnosed and overlooked.

At the time the film was released, doctors and nurses routinely screened for things like gestational diabetes, sexually transmitted infections, hypertension, and preeclampsia during pregnancy, but most made no mention of and did not screen for more commonly occurring mental health issues. As one mother interviewed in the film pointed out, post-delivery, many doctors seem solely focused on discussing options for birth control, leaving new moms solely responsible for bringing up mood and emotional struggles on their own.

When doctors do screen for mood issues, they typically do so via the Edinburgh Postnatal Depression Scale. While this is a step in the right direction, my problem with the scale has been that it screens for only a handful of potential symptoms and is typically administered only once, if at all, by OB-GYNs (at the six-week follow-up appointment). Some pediatricians have begun administering the scale more regularly at newborn appointments; however, this still monitors the mother’s mood for only a short window of time. Beyond that, mothers are left alone to recognize and report their symptoms and, unfortunately, given the lack of resources and awareness about postpartum mood issues, many mothers are afraid or embarrassed to seek the help they desperately need.

During the production of Dark Side of the Full Moon, several moms were interviewed and various news stories were collected. They detailed the suicidal thoughts, attempts, and actual deaths of both mothers and children. One mother talked about how she was too afraid her child would be taken away to admit what was going on, and another talked about how easy it was to lie on the Edinburgh scale due to feelings of embarrassment or shame. The lack of awareness and resources for mental health issues in motherhood make it difficult for suffering women to get the help they need.

As pointed out in the film, when a mom is diagnosed with cancer, family and friends offer an outpouring of support—from sympathy to practical help with things like cooking meals. But when mental health issues are brought to light, people tend to shy away, not knowing how to react or what to say. The stigma around mental health issues remains an overarching issue in our society, and postpartum depression is no exception.

Women I’ve seen in my private practice have expressed desperation regarding where to turn to deal with their symptoms. OB-GYNs and general practitioners often don’t want to be responsible for a patient’s mental health or psychiatric needs, thus they are unwilling to prescribe medications to those who report symptoms of mood conditions. While this is understandable—they should not be practicing outside their realm of expertise or scope of practice—patients are often left with subpar referrals. They are simply told to seek therapy; however, even within the mental health field, many practitioners do not understand postpartum mood issues or recognize that medication is often necessary.

All too often, suffering moms are passed back and forth between doctors and therapists not truly equipped to help. Discouraged, many mothers give up and suffer in silence—or, worse, end their lives.

All too often, suffering moms are passed back and forth between doctors and therapists not truly equipped to help. Discouraged, many mothers give up and suffer in silence—or, worse, end their lives. As one mother in the film explained, the therapist she was referred to had a three-month wait list. She contacted 29 other providers, but nobody was able to help. This is just one example among the thousands of women whose issues are going untreated.

I personally experienced my doctor’s caution in writing me a prescription when I told her of my symptoms and history of postpartum depression. While she did write me a prescription, she made sure to point out I needed to follow up with a psychiatrist, as she could not be liable for my ongoing mental health care. While I assured her I knew where to go, I couldn’t help but wonder, had I not been in the mental health field or connected to a network of providers, would my doctor have provided appropriate referrals to professionals who were not only available but also knowledgeable enough to help?

Naturally, medical doctors are in the business of medical health. OB-GYNs monitor pregnancies and deliver babies. They are not trained in psychiatry and cannot be responsible for the mental health needs of their patients. However, what if a person doesn’t have a psychiatrist or know where to turn for therapy and long-term monitoring and support for their mental health issues?

I am fortunate in my community to be part of a collaborative network of health care providers, including medical doctors, psychiatrists, therapists, nutritionists, etc. A good referral or answers to a request for input or advice is only an email away. I am also lucky to work closely with a psychiatrist who is well-trained in issues of postpartum mood issues. The people we have worked with together have benefited greatly from a combination of supportive therapy and medication. Unfortunately, not all health care practitioners are as interested and willing to put forth the extra effort involved in networking, collaborating, and staying connected.

Given the problems brought to light in Dark Side of the Full Moon, I can’t help but think women, more often than not, are not getting the information, referrals, or help they need. At the onset of filming Dark Side, producers look at what the American Congress of Obstetricians and Gynecologists (ACOG) had to say about postpartum depression and found the following:

“Depression is very common during pregnancy and the postpartum period. At this time there is insufficient evidence to support a firm recommendation for universal antepartum or postpartum screening. There are also insufficient data to recommend how often screening should be done. However, screening for depression has the potential to benefit a woman and her family and should be strongly considered.”

Given all the instances of postpartum depression and subsequent tragic deaths detailed in the documentary, producers reached out to ACOG to find out what the organization was planning to do to address the problems and lack of sufficient data. Nobody responded to their calls; however, several weeks after the film was released, ACOG issued a new statement that reads as follows:

“Maternal suicide exceeds hemorrhage and hypertension disorders as a cause of maternal mortality. The college recommends that clinicians screen patients at least once during the perinatal period for depression and anxiety.”

While advances are slowly being made to address issues with postpartum mood issues, there is still a long way to go. Fortunately, anyone reading this article is already connected to a website, GoodTherapy.org, where you can search for qualified providers in your community. If you are struggling with mood issues related to pregnancy or motherhood or know somebody who is, please know there is help out there. Additional resources can be found through Postpartum Support International.