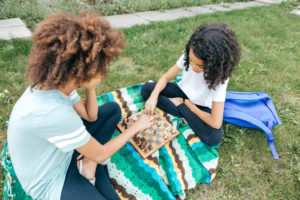 A strong sense of ethnic identity can improve black girls’ self-esteem and also promotes greater engagement at school, according to a paper published in Psychology in the Schools.

Black girls face multiple barriers to success at school and self-esteem. These include racial stereotypes, sexism, and institutional discrimination.

GoodTherapy.org reported on a 2017 study that found adults often perceive black girls as less “innocent” than their white peers. Another 2017 study found college-aged white women may be less willing to intervene when a black woman is at risk of being raped. Black girls are more likely to be disciplined at school or miss class. This may explain why their academic performance often lags behind the performance of their white peers.

The small study followed 12 black middle schoolers. Researchers divided them into two groups of six students. The first group participated in a six-week after-school program on mindfulness. It acted as the control.

The second group participated in a condensed version of the Sisters of Nia program. The program was designed to nurture cultural pride and ethnic identity. Each week, the curriculum focused on a new principle: unity, respect, purpose, cooperation, self-determination, or believing in oneself.

At the end of the intervention, the team surveyed the students and their teachers. The surveys assessed the girls’ understanding of ethnic identity, self-esteem, and school engagement. School engagement is a measure of students’ commitment to and involvement with school. Previous research has linked it to academic success.

Students who participated in Sisters of Nia had a heightened sense of racial and ethnic identity. This identity increased over the six weeks following the completion of the program. The program also increased girls’ affinity with a humanist perspective of race—the idea that racial identity has value and should not exclude them from the larger community.

After six weeks, the two groups switched. The control group was allowed to participate in the Sisters of Nia program, and the second group took on the mindfulness curriculum. This way, no girl was excluded from the intervention program.

The survey results suggest that after-school programs can strongly improve cultural awareness and school engagement for black girls. These programs may improve students’ performance by boosting their self-confidence and commitment to school.