Creative Blocks from A to Z: Perfectionism 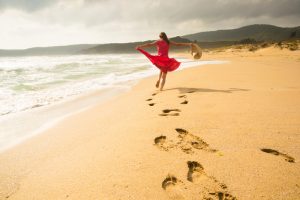 Editor’s note: This article is the 16th in an A-Z series on issues related to creative blocks. This month we explore how perfectionism gets in the way.

I once worked with a Broadway triple threat (dancer, actress, and singer) who suddenly found herself having great difficulty showing up to auditions. She had been involved in a successful theatrical performance in the past, but once the show ended she did what all her peers seemed to do and scheduled many auditions—often two or three a week. A strange thing tended to happen, though: she would wake up the day of the audition and somehow decide not to go. She recognized the self-sabotaging nature of her behavior but could not understand why it kept happening or how to change this pattern.

After going through her audition preparation routines together, we quickly recognized an order of events that kept coming up. She would read through the material, try to anticipate what the casting agents were looking for, and go over her parts again and again until they were “perfect.” Initially she hesitated to use the p-word, but after describing her intolerance for mistakes; her need to adhere to what she presumed others were looking for; and her aversion to the idea of disappointing, she admitted she was going for perfection. Feeling even slightly unprepared was enough of a reason for her to avoid auditioning altogether.

Perfectionism can hinder creativity. Imagine trying to express yourself through any art medium (painting, film, writing, etc.) and meeting every creative idea with a thought about what is missing from it. If the focus is on what technique is lacking, what word is used improperly, and who it might disappoint, a person may not be able to fully immerse themselves in the adventurous process of creative exploration. The generation of ideas is almost certain to suffer—both in terms of quality and quantity.

Of course, these mental and psychological responses are often not conscious, let alone intentional. This is why the first step in the process of accepting imperfection is to actually use the p-word. Acknowledge the perfectionism holding you back. Perfectionistic traits can be inherited as much as acquired. They can be a result of high social standards or the result of biologically predisposed obsessive-compulsive tendencies. Regardless of the cause, being able to spot perfectionism and confront it in a nonjudgmental manner is the beginning of the end of perfectionism’s hold.

Regardless of the cause, being able to spot perfectionism and confront it in a nonjudgmental manner is the beginning of the end of perfectionism’s hold.

The next idea has to do with messiness and how it is an integral part of the creative process. The idea of having an extra canvas on hand when painting, in case the first one ends up in the discard pile, is an old one. The expectation is mistakes will happen, messes will be made, and new versions or drafts will be developed. Starting off with the mind-set that creative work not only survives but requires some degree of messiness (both literally in the physical sense and metaphorically in the sense one is bound to start over many times during the creative process) may help protect you from the discouragement that typically accompanies imperfection.

Finally, managing perfectionism would be incomplete without managing the anxiety that comes up in the absence of perfection. For many people, flaws, mistakes, and failures feel almost inexcusable. One of the first things the Broadway performer and I worked on was tolerating the distress that came from not getting called back, from forgetting lines, and from otherwise being human. By working on allowing herself to “stay” in the anxious state—by teaching her body how to remain relaxed and by challenging automatic negative thoughts—she eventually felt more free to take her creative interpretations of her roles to unfamiliar but exciting territories.