Creative Blocks from A to Z: Learned Helplessness 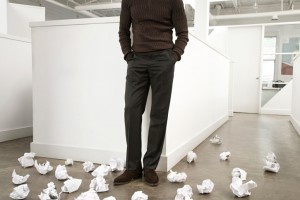 Editor’s note: This article is the 12th in an A-Z series on issues related to creative blocks. This month we look at how learned helplessness can impede creative growth.

The concept of learned helplessness is well known among psychologists. Therapeutic work in the area of depression, in particular, often means dealing with this extremely common cognitive process, whereby a person convinces himself or herself that putting effort into something is pointless. Based on this belief, one is less inclined to take action and, consequently, is less likely to achieve his or her goals. This cyclical relationship between cognition and action becomes a self-fulfilling prophecy conveying the message that one is incapable of succeeding.

This type of thinking is often present in people struggling to overcome creative blocks. The belief that creativity cannot be enhanced and is determined by factors beyond the person’s control—fixed talents and intelligence, for example, or rejection by others—can be very demotivating. This type of learned helplessness is detrimental for creative individuals whose work is as driven by focus and effort as much as by spontaneous inspiration.

The attitude associated with a person’s belief that he or she “just can’t do it” may substantially define the person’s relationship to the work itself. For example, a pop musician who begins tackling a new jazz project with the underlying conviction that “there’s no point in trying hard” because he or she “knows nothing about jazz” will likely demonstrate less enthusiasm, focus, and confidence in creative expression.

Luckily, there are ways to address and confront learned helplessness as it relates to creative blocks.

The first part of the process is to recognize it. It’s not always easy to catch ourselves having self-defeating or self-sabotaging thoughts. It helps to get into the habit of becoming aware and consciously mindful of the things we tell ourselves and how they impact us.

The second part is to challenge it. Sure, there are limitations; everyone has them. These limitations may interfere with our abilities to pursue our creative goals. However, there are many times in which these are merely perceived rather than actual limitations. Just because you did not finish that last painting does not mean the same will happen with the next one, and just because you are told the guitar solo you are working on is hard does not mean that practice will not get you there.

Being able to “sit with” the potentially negative emotions of trying to get there despite previous failed attempts is an important part of conquering the experience of learned helplessness.

The third step involves tolerating distress associated with the waiting game. It may take a while for an abstract, vague idea to take life and morph into the desired result. Being able to “sit with” the potentially negative emotions of trying to get there despite previous failed attempts is an important part of conquering the experience of learned helplessness. On the other hand, avoiding distress by simply deciding you can’t do it will only reinforce this destructive thinking pattern.

Finally, it is important to open-mindedly embrace the many directions the creative process can take. It is not uncommon for creative individuals to overlook great ideas and to be overly judgmental of the not-so-good ones. By reminding yourself to be more gentle and accepting of all ideas that come up during a brainstorming process, you may be less likely to be hindered by a narrow perception of what it means to be successful.