Conversation About a Cat: Bereavement Work with a First Loss 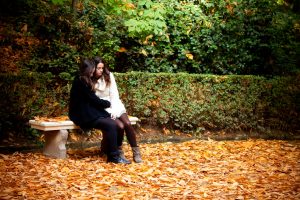 Sometimes the most valuable part of the training and experience of a therapist is that it helps you to hold your tongue.

Mark came in one evening for his regular session. I could see he’d gotten some bad news. “My cat died,” he told me bleakly. “I found her this morning.” His voice broke and he wept.

This was hard for me to witness. I’ve worked for many years among people impacted by AIDS. Many of them have been at end stage, and many have lost great numbers of loved ones. For that matter, I’ve experienced my own losses, including my partner of 23 years. My first and very strong impulse was to tell Mark to save his grief for people.

If I had, I very likely would have derailed what followed. Fortunately, I instead asked, “What happened?”

He had gone out into the backyard that morning to feed Sheba and found her lying under the big hibiscus. At first, he told himself she was sleeping. But he knew she didn’t sleep sprawled out like that. “I couldn’t believe she was dead,” he said. His disbelief filled the room we were in, as if we’d come up against an invisible wall—something that couldn’t be, yet was.

He picked her up, trying to elicit some movement from her. Mark was Buddhist, more of a philosophical one than a literal one. But in that moment, he called on Amida Buddha, the Buddha of the Pure Land, to not let Sheba be dead. He’d make a substantial donation to the temple he sometimes attended if she wouldn’t be dead. As it grew clearer that she was gone and would remain so, he became furious.

“There was nothing wrong with her,” he said indignantly. “She wasn’t shot or killed by a coyote. She hadn’t been sick. She shouldn’t have died.” I could feel his anger. It was as if someone had broken a rule and gotten away with it. It wasn’t fair; it wasn’t acceptable.

Elisabeth Kübler-Ross describes a cycle of responses to the news of death—denial, anger, bargaining, depression, and acceptance. What I’ve observed is we don’t necessarily go through these stages in Kübler-Ross’ order, nor do we necessarily go through each stage once and are then done with it. We often move back and forth, visiting and revisiting each stage, sometimes for years. It’s as if there are parts of the brain that, like small towns out in the countryside, don’t receive the news of death until long after the event. The spiking of sadness that accompanies this cycling is sometimes called the pangs of grief.

“I don’t think I want another cat,” Mark said. “I can’t go through this again.” Then something occurred to him. “But it’s not just Sheba, is it? John can die, too.” John was his husband, with whom—after a period of seemingly irreconcilable relationship issues—he had settled down into domestic happiness. They were talking about adopting, raising a family. “Anyone,” he said, gazing at the terrible truth. “Anyone can die. Anytime.”

Mark was a younger man, half my age. His generation hadn’t been hit as hard by AIDS as mine had, and this was his first loss, at least that he’d mentioned in our sessions. He hadn’t been here before, at this lookout point from which we get the first clear view of mortality—that it’s the rule, not the exception. Sigmund Freud said back in 1916 that each of us owes one death: our own. I was concerned for Mark. He had gotten here so quickly from the death of his pet.

Or was it so quickly? Why was I so resistant to honor that Sheba the cat was as meaningful to Mark in this moment as my partner had been and still was to me? Was I hoping to be more “special” than Mark in some unspecified way, as if my losses were greater than his? Because he was right on the money: everyone can die, and at any time. My partner’s death, and those of my friends and colleagues, didn’t guarantee me any free passes from the universe.

“It’s risky loving someone who can die,” I said.

“If it hurts this much to lose Sheba, I don’t want to find out what losing John would feel like,” Mark offered. “Or my parents. Or my nephews. Or my friend Billy.”

I thought about asking how he planned to avoid that, though the chill in the room suggested withdrawal from life. I wasn’t getting any cues he was actively thinking of harming himself. This was a different kind of crisis.

He told me. About curtains she had climbed and ruined as a kitten, hiding places she had found, and naps she had taken with him, curled on his chest. The time she got out and came home two days later with the tip of her tail broken, and he and John got a ticket rushing her to the vet. He showed me pictures of her on his phone, including her body wrapped in something embroidered.

A toddler crying over a dropped ice cream cone, a teenager over their first breakup, a man at the death of his partner—all of these are rehearsals, encounters with the nature of our life here. Which is that things—our loved ones and ourselves—will end.

“So many memories,” I murmured. “So much life.”

“Is this the price of loving someone, this grief?” he said.

“They seem connected this evening,” I replied.

“Huh,” I said, pondering. “Miss out on life. Almost like you’d lose everybody anyway, but you wouldn’t have gotten to meet them first.”

“What do I do if everyone I love dies?” he said.

“Well, you grieve, Mark. And hopefully you grieve your way back.”

“I could be with them while they’re here? While I’m here,” he wondered.

It was the end of the session. We stood up. “What do you think you’ll do?” I asked as he got into his jacket.

“I think I’m going to take John out to dinner at his favorite place tonight. And maybe get a kitten,” he said. “But not right away. Later on.”

I was amazed. It was as if Mark had gone through bereavement and come back into life. It was a path he would no doubt walk many times, and he had blazed it as I watched.

In part because of this witnessing, sometimes it seems to me all our losses fit onto a single continuum. A toddler crying over a dropped ice cream cone, a teenager over their first breakup, a man at the death of his partner—all of these are rehearsals, encounters with the nature of our life here. Which is that things—our loved ones and ourselves—will end.

The Sufi poet Rumi described how his soul once found a great treasure, the cost of which would be Rumi’s life. His soul told him excitedly this was a bargain and they should buy it.

What makes each of our lives unique is what we do with them, how we live, what we experience, what we try to avoid. We purchase our life with our life, as Rumi’s soul taught him, as Mark learned.

As Mark showed me, the knowledge of this ending carries a risk of shutting us down. But if we push through our fear, that same knowledge can be what shepherds us back toward life—time-limited, one-to-a-customer, not-to-be-missed life. And as I also learned in my work with Mark, sometimes it’s best if I don’t talk as much as I’d like, but just listen.

Note: Names and other identifying information in the preceding article were changed to protect confidentiality.