Connecting as a Couple: Key Skills That Can Transform Your Sex Life 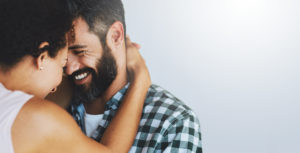 Maintaining a strong connection in and out of the bedroom, while navigating various life stressors, is difficult for even the most adept couple. This article explores how one (fictional) couple is getting it right. Sandra and Devon have found a way to make sexual and emotional intimacy a priority. This article highlights key knowledge and skills that help Devon succeed. Last month, the author presented this interaction from Sandra’s perspective.

Devon gets home from work around 6:30 p.m., shortly after Sandra. Devon sees Sandra cooking dinner and happily remembers the connection he felt with her when they talked this morning and agreed to have sex tonight. Devon kisses Sandra on the cheek, but she looks up only briefly to say hello.

Devon feels momentarily hurt, wondering if maybe they weren’t as connected as he thought. However, he takes a breath and remembers how Sandra processes things. When she gets home from work, she is usually in “task mode” until dinner and child care are addressed. Devon admires her ability to manage everything—the kids, the house, and her work, and knows he couldn’t do it without her.

Devon suddenly has a fearful thought about sex being just another burden for Sandra to manage. It was not long ago Sandra expressed resentment during therapy about his “demands” for sex that she got nothing out of. Hearing that was extremely hurtful, and the thought still nags at Devon. However, Devon and Sandra spent a lot of time exploring the hurt and resentment, making amends, and addressing the issues that led to it in the first place. Devon makes a conscious choice not to dwell in his hurt from the past. He chooses instead to assume good intentions from Sandra, trusting they will each communicate their thoughts, feelings, and needs as they’ve been practicing.

Devon busies himself with dinner, chores, child care, and following up on a few work emails. By the time they’re both able to sit down and relax, it’s 9:30 p.m. Devon is looking forward to connecting with Sandra and feels a rush of desire for her.

Devon recalls the dual control model of sexual response, which describes the two systems responsible for sexual response—the sexual inhibition system (SIS), or sexual brake, and the sexual excitation system (SES), or sexual accelerator. Devon discovered his brake has a low sensitivity, which means it takes more to slow or inhibit his sexual response than for someone with a moderately sensitive brake, such as Sandra. Things that activate Devon’s brake include uncertainty about Sandra’s level of interest, physical exhaustion, feelings of rejection, and performance anxiety.

After he turned 30, Devon began having occasional erectile difficulties. He noticed it sometimes took him longer to become fully erect than it used to, and every now and then his penis became soft during intercourse. This was disturbing to Devon, as he had never had this issue before. His doctor told him there was nothing wrong physically, yet he began to have fears of inadequacy as a man and as a sexual partner. In therapy, Devon learned variation in erectile response is normal. It’s normal for the penis to gain and lose engorgement during a sexual encounter and for him to have different levels of responsiveness at different times. His responsiveness has everything to do with his SIS and SES, and which factors are at work.

Devon’s accelerator has moderate to high sensitivity, which means he is more easily excited than Sandra, whose accelerator has a low sensitivity. Things that activate Devon’s accelerator include feeling connected to Sandra, seeing attractive images, receiving attention from Sandra, physical activity, and feeling confident. The difference between Sandra’s and Devon’s SIS and SES used to cause problems, as they continually misinterpreted each other’s sexual responses. Devon frequently felt unwanted and rejected by Sandra, and Sandra often felt pressured and unappreciated. Learning that their differences in sexual response are normal gave Devon and Sandra the language and permission to understand, validate, and connect with each other.

Sandra and Devon made good use of the information they learned in therapy, which helped them (1) understand themselves and each other and (2) communicate in a way that fosters connection rather than deterring it.

Devon embraces Sandra, and is encouraged when she hugs back and says she needs some time to unwind. In the past, Devon might have perceived this request as a rejection, but now he knows Sandra is attending to her needs by addressing the factors activating her sexual brake. They spend 30 minutes talking about their days while Devon massages her hands and feet.

Devon has also learned, in situations like this, it’s best to let Sandra initiate the sexual interactions when she is ready. Sandra begins to kiss Devon, which arouses him. He uses breath and a present-moment focus to keep himself from racing ahead. Devon has learned from Sandra’s slower sexual response how an inordinate focus on the “goal” of intercourse can cause him to miss the subtler but equally enjoyable pleasures in between. Moreover, Devon’s body responds better when the foreplay lasts longer. His erection tends to be stronger and his orgasms more expansive.

As the foreplay is building, Sandra says she’s enjoying it and doesn’t want to push for more. Devon insists he is happy to spend more time on Sandra so she can have an orgasm. When Sandra turns this down, Devon feels disappointed. His mind races for a minute, wondering why she wouldn’t want to orgasm and how she will feel about it if he does and she doesn’t. Devon takes a deep breath and stops himself in these thoughts.

Just as Devon has worked to let go of intercourse as the measure of success in sex, he has also been learning to let go of orgasm as the measure of satisfaction, especially for Sandra. She uses a variety of terms now to describe her pleasure, including pleasure peaks, waves of pleasure, climaxes, and orgasm. Often, she experiences a strong wave, climax, or orgasm; however, there are times when she says the slow, rolling waves of pleasure are right where she wants to be. Devon has difficulty understanding this because his experience of orgasm is different; however, he can relate to there being different kinds of orgasm. Some of his orgasms are full-bodied and expansive, while others are focused mainly in the groin area and less intense.

Devon nods his understanding to Sandra, and they continue foreplay, then intercourse until both feel satisfied. They hold each other afterward and enjoy feeling close, each feeling seen and validated and trusting that it is a mutual experience.

Sandra and Devon made good use of the information they learned in therapy, which helped them (1) understand themselves and each other and (2) communicate in a way that fosters connection rather than deterring it. Devon practiced active awareness of his thoughts and feelings in the moment, which allowed him to identify when he was being triggered by past experiences and make a choice about how to respond. Devon also used openness and flexibility in his understanding of sexual response and satisfaction, which allowed him to embrace both his and Sandra’s experience as it was and feel content in that, knowing they both feel satisfied.