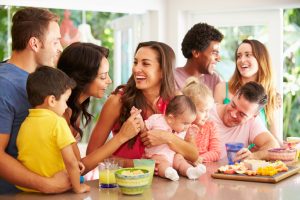 “She’s a little shy,” was our common refrain when someone asked our daughter a question and received no response. But we long suspected she was different.

When our new-parent friends were excitedly talking about their baby’s first words, followed soon after by hilarious accounts of nonsensical word phases, eventually giving way to logical conversations they had with their kids, my daughter appeared generally unimpressed.

My husband tried to comfort me by reminding me it’s okay that she is an introvert. Still, quiet conversations about what she was saying (or not saying) dominated our pillow talk for many nights.

She was born with a life-threatening infection. While she was released after nearly a month in the NICU with a clean bill of health, doctors warned us the infection and the medications used to treat it could lead to complications later on.

She was otherwise a physically active, generally happy kid, and she seemed to understand everything we said, but the underlying suspicion was always on our minds—something wasn’t right. By age 2, we knew she wasn’t talking like other kids. She wasn’t talking much at all.

When she wanted something, she would usually say one word, or point and grunt, and when we couldn’t figure it out, she would sink to the floor in tears and frustration. Her doctor ordered an evaluation for early intervention, but because her comprehension skills tested in the normal range, she was denied.

Most days, when I picked her up from daycare, all the other kids would be sitting around a table playing with blocks and other toys. I would find my daughter by herself staring out the window, or sitting alone in the “library” looking at a book.

We continued explaining to well-meaning neighbors and friends who tried to engage her that she was the quiet type. Only we couldn’t deny the nagging feeling she wasn’t quiet by choice.

The pediatrician acknowledged our worries at every visit and reminded us that children develop at different paces. But when we brought cupcakes to her class for her third birthday, we were blown away. All her friends sang happy birthday to our little girl. She blew out her candles and happily sank her teeth into her cake, while the other kids were talking to us and to each other, calling one another silly names and goofily taunting my husband with their plays on words.

We had a great time, except for the giant elephant in the room: The birthday girl was silent.

Her next evaluation included home visits from a child psychologist, a speech pathologist, and school observation with a special education teacher who had to come twice because, unsurprisingly, our daughter refused to talk to her the first time.

When I was at last called into a meeting to discuss the evaluation findings, I was prepared for her to be denied once again. Instead, I was informed she qualified for not one hour of intervention per week but seven hours, split between individual speech therapy and special education in her class to help her socialize with her friends as she learned to talk.

When I got home from that meeting, I read and re-read the documents I had signed. Finally, what we had known for so long was acknowledged, in writing, by people in a position to help her. I felt validated, relieved, and worried. I crawled into bed and wept. My beautiful child had been quietly struggling, and she was going to get support.

But I needed support, too, from people who had been where I was, and I didn’t know where to turn. The only idea I could think of was to ask for help from our neighborhood listserve. I knew I would be revealing to countless people we had never met, and to neighbors we knew and saw regularly, that our child was struggling. I felt vulnerable as I pressed “send” on the email asking if anyone with similar issues would be willing to speak with me.

I could not believe how many parents responded. People offered to answer my questions by email, invited me to call them on the phone, and told me about their experiences. One parent, whose daughter was a year older than mine, wrote me a long and thoughtful message. I didn’t know her personally, though her recounting of her child’s challenges could have been written by me.

But there was a bright spot, she continued. The interventions were helping. For example, that morning her child said he liked her dress. For some parents, that wouldn’t be a big deal, but she said it made her day. I opened her email on my way home from work and cried as I read it. I felt hopeful, filled with gratitude, and less alone.

I was reminded that when we find ourselves embarking on challenges we never expected to stumble upon, we can gain comfort from unanticipated places. Our job is to ask for the support. We don’t know where it will come from, but when it comes—and we must trust it will—it is one of the great blessings in life.