Cold at Work? Outdated Thermostat Formula May Be to Blame 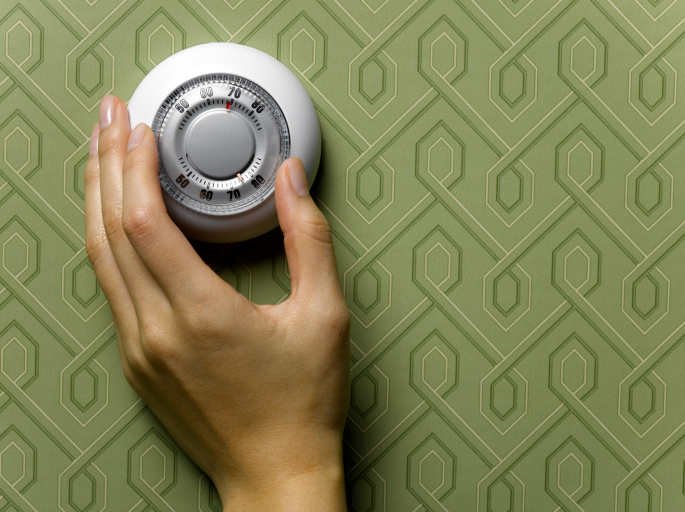 Disagreements over thermostat settings and the best office temperature occur in many offices. Even in cities where summer temperatures routinely soar to triple digits, one might still find office workers wrapped in blankets, sitting next to space heaters, or wearing heavy coats.

Though both men and women may find the climate in their office to be too hot or too cold, a recent study by Boris Kingma and Wouter van Marken Lichtenbelt suggests that women may be more likely to feel cold at work because many office temperatures are calculated to be comfortable for the average man.

How Are Office Temperatures Calculated?

According to the study, which was published in Nature Climate Change, basic metabolism is the reason why many women often feel slightly colder than men do at the same temperature. On average, women have more body fat and slower metabolisms than men do, say the study’s authors. This can cause some women to become cold more easily.

Many thermostats use a formula to determine the most comfortable office temperature. One variable included in the formula is average resting metabolic rate, which is a measure of how quickly the average person generates heat. This variable is based on the metabolism of a 40-year-old man who weighs about 154 pounds, and it overestimates the heat production of an “average” woman by as much as 35%, the team says.

The average man now weighs 195 pounds, according to the CDC, which is 41 pounds more than the formula’s average man. This may be one reason some men can feel warm in an office while some female coworkers combat the chill with blankets and space heaters.

Old Formula May Benefit from Update

The degree to which office temperatures might increase would likely vary from place to place. While a 70-degree room might feel comfortable to some men, 75 degrees may be a more comfortable temperature for many women.

Uncomfortable temperatures in an office may negatively impact employee productivity, so improving the formula to better represent today’s workforce may be a helpful step for some employers. Doing so may also have the added benefit of reducing energy use. However, other factors such as shared building space, poor ventilation, and crowded offices may also play a part in office temperatures.