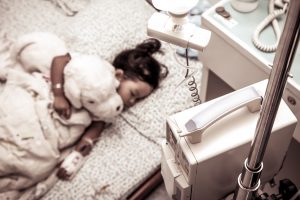 Opioid poisonings of children and adolescents doubled between 1997 and 2012, according to research published in the journal JAMA Pediatrics. The increase coincided with epidemic rates of opioid abuse among adults. Opioid-related overdose deaths have reached record highs, with prescription opioids such as Vicodin and illicit opioids such as heroin now claiming more lives than car accidents each year.

Though public health experts have increasingly publicized concerns about opioid use and abuse among adults, doctors did not know how many children experience ill health effects due to opioid use and abuse each year. To weigh the effects of opioids on children, researchers from the Yale School of Medicine analyzed child hospital discharge records every three years from 1997-2012.

Heroin poisoning-related hospitalizations increased by 161% among teens ages 15-19. There was also a sharp increase in poisonings due to methadone, a drug designed to combat opioid withdrawal symptoms. Teens were hospitalized due to methadone poisoning at a rate of 1.05 per 100,000 children—a 950% increase.

According to the study, 176 children (1.3%) died while hospitalized.

The Demographics of Opioid Poisonings

The number of children ages 10-14 poisoned due to attempted suicide or self-harm increased during the study, from 0.62 to 0.85 per 100,000 children. The number of accidental poisonings increased by 82%.

The study’s authors caution that some of their estimates are due to diagnostic codes that have the potential to be miscoded. Demographic data also cannot provide a full profile on children who experience opioid-related health issues or provide details on why those children were exposed to opioids.

The study emphasizes opioid abuse and accidental poisonings, particularly of prescription opioids, will likely continue to be a significant public health issue unless further interventions and resources are directed toward stemming the epidemic.