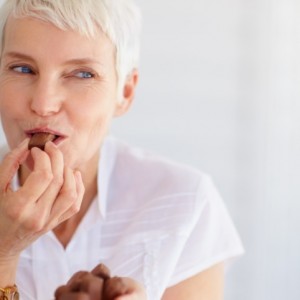 If you think you need to cut out chocolate to be healthy, think again. Chocolate might be high in calories, but it’s also high in something else: flavanols. According to a new study, these chemical compounds could help reverse memory loss by as much as 20 to 30 years.

The study, which was financed in part by a chocolate company, was published in Nature Neuroscience. To evaluate the effects of flavanols on the brain, researchers looked at the dentate gyrus. Problems in this area of the brain are correlated with an increase in age-related memory loss, though it’s important to note that the dentate gyrus does not play a major role in Alzheimer’s disease.

Researchers gave 37 volunteers, who ranged in age from 50 to 69, either a high- or low-flavanol diet for three months. The high-flavanol group drank a flavanol-rich drink each day. Participants underwent memory tests that target the dentate gyrus, as well as brain imaging studies, at the beginning and end of the study.

Researchers uncovered marked improvements in the health of the dentate gyrus among participants who consumed the flavanol-rich drink. Perhaps even more promising, the high-flavanol group showed stunning improvements on the memory tests, often showing results more typical of someone 20 or 30 years younger. A person whose memory was similar to that of an average 60-year-old’s, for example, had results more similar to a 40- or 30-year-old at the end of the study.

While this study could provide a good reason to eat more chocolate, one thing is clear: the study’s results do not suggest that chocolate will prevent or reverse Alzheimer’s. Rather than testing the effects of chocolate on dementia or other serious conditions, researchers instead evaluated its effects on normal memory decline, which is distinct from the memory decline associated with Alzheimer’s.

It’s also unclear whether eating chocolate is as effective as drinking a flavanol-rich drink. The cocoa extraction methods used to create many chocolate snacks remove a large portion of naturally occurring flavanols.

Previous research has found that flavanols can help combat a number of health problems. Flavanols contain antioxidants, which can help reverse some signs of aging and fight diseases such as cancer. Flavanols may also improve vascular health by lowering blood pressure, improving circulation, and reducing the risk of blood clots.

If you’re not a chocolate lover, you can still take advantage of flavanols’ health benefits. Foods such as apples, peanuts, cranberries, onions, red wine, and some kinds of tea are also rich in flavanols.