Can Hypnosis and Diet Help Manage the Pain and Distress of IBS? 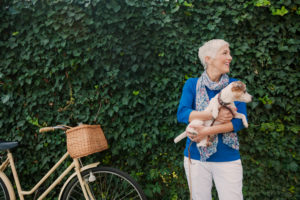 Irritable bowel syndrome, or IBS, affects between 8% and 20% of people and tends to be more common in women than men. People who have IBS report frequent gastrointestinal discomfort and changes in bowel habits—including diarrhea, constipation, or both—that can interfere with work, social activities, and other areas of life. In addition, IBS is known to both increase emotional distress and be worsened by it.

The cause of IBS is unknown, and treatments options at present are limited. The latest thinking is the best approach may involve some combination of dietary changes, medication if necessary, and mind-body approaches to decrease stress, increase calm, and help manage pain.

In addition to stress, a common trigger of IBS symptoms is diet. In general, diets that involve eliminating certain foods have been shown to be more helpful at reducing IBS-related diarrhea than constipation.

One approach that has gained considerable attention is the low-FODMAP diet. The acronym FODMAP stands for fermentable oligosaccharides, disaccharides, monosaccharides, and polyols, which are molecule-sized carbohydrates. High-FODMAP foods are fermented by intestinal bacteria and thought to contribute to the abdominal pain and distention that are characteristic of IBS.

Examples of high-FODMAP foods include onions, garlic, wheat, apples, soybeans, and the like. The low-FODMAP diet is based on lists of foods to avoid, as well as alternatives that are more IBS-friendly.

Hypnosis is a mind-body approach that has been shown to be helpful for IBS and a number of other conditions. Hypnosis or hypnotic trance is characterized by a greater sense of absorption in and attention to a desired feeling or other state. During a session, a therapist who is certified in clinical hypnosis helps the person in therapy to learn to induce feelings of greater calm and comfort; address triggers of stress and pain; and provide alternative ways of thinking about them. Suggestions are simply verbal statements, sometimes in the form of imagery, that can guide the person to amplify desired thoughts, emotions, or sensations and create the sense of more normal gastrointestinal function.

With regard to experiencing hypnosis, some people may feel “trance-y” or a bit daydreamy, but this sensation is not necessary to achieve benefit. In addition, hypnosis is easily combined with psychotherapy approaches such as cognitive behavioral therapy, as well as with relaxation training techniques, meditation, and more.

Hypnosis, Diet, or Both for IBS Symptoms?

A 2016 study looked at whether hypnosis, a low-FODMAP diet, or the combination of these would help reduce physical and emotional symptoms of IBS. For this study, 74 people with IBS were assigned to one of the three treatment conditions. Those in the hypnosis-only group received one hour per week of scripted hypnosis over the course of six weeks. Sessions were aimed at reducing gastrointestinal symptoms. In addition, participants in this group were given a recording of the session that they were asked to listen to daily over the course of the six weeks and then as often as they liked afterward.

Gut-directed hypnosis and following a low-FODMAP diet are two approaches worth considering for those who experience IBS and especially for those who have not found sufficient relief otherwise.

Those in the diet-only group met with a dietitian initially and then were asked to avoid high- and moderate-FODMAP foods, eating only low- or no-FODMAP foods for the entire six-week period. They also received educational handouts, recipes, and were contacted weekly by phone to help them stick to this eating plan.

The third group received both the hypnosis and diet interventions as described above.

Changes in Gastrointestinal Pain and Other Physical Symptoms

Changes in Anxiety, Depression, and Quality of Life

The researchers concluded that both hypnosis and following a low-FODMAP diet resulted in improvements in IBS symptoms that were generally comparable. However, hypnosis was more effective than diet for reducing psychological symptoms. By six months, those who had been in the hypnosis group continued to experience some nausea relief. Again, hypnosis, diet, and the combined interventions all resulted in improved quality of life.

Here are some specifics regarding changes in psychological symptoms in each of the three treatment groups:

IBS is a gastrointestinal condition that can cause significant pain, bloating, and other bothersome symptoms, as well as significant anxiety and depression that can result in poorer quality of life. Both mind-body interventions, such as hypnosis, and dietary changes have been shown to result in improvements in symptoms and quality of life. Gut-directed hypnosis and following a low-FODMAP diet are two approaches worth considering for those who experience IBS and especially for those who have not found sufficient relief otherwise.