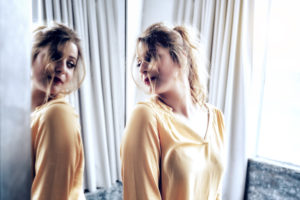 A close female friend recently asked me, “Why do we women always express that we hate our bodies and say things like ‘I’m so ugly,’ when we aren’t?”

A majority of women and girls do not actually hate their bodies, or themselves, for that matter. Research has demonstrated that differences in general self-esteem by gender are generally small (Kling, Hyde, Showers & Buswell, 1999 and Feingold, 1994). According to the results of another study, men show only slightly more self-compassion when making self-judgments (Yarnell, Stafford, Neff, et al., 2015).

Thus, while it may be true that body image issues are more prominent in women, (Brennan, Lalong, & Brian, 2010) , most women do not have a pathological level of self-hatred or body image dissatisfaction. Yet women are more often heard making complaints about their looks, even when they don’t actually think the negative comments are true. Why might this be the case?

The Impact of Social Expectations

One of the obvious reasons, in my opinion, is that in many societies and cultures, women may be primarily valued for their appearance. In other words, more emphasis may be placed on female attractiveness and beauty than on their other traits, or on the attractiveness of people of other genders. Because of this, the self-worth of women may often be tied to their notion of how their body measures up to the bodies of others, whether these others are “real” people in their daily lives or airbrushed and Photoshopped women in advertisements.

We are likely all aware of the pressures—often beginning as early as adolescence—women face to direct their efforts toward changing and maintaining their appearance in order to align with social expectations. One recent survey, in fact, found that 65% of the women who participated in the survey were body-shamed for the first time before the age of 14.

Body-shaming messages are everywhere: in the media, at school, even at home. However, while they can easily contribute to a lack of self-esteem or negative views toward the self in some people, the prevalence of these messages does not, on its own, explain why women often express negative views about themselves, even if they don’t actually dislike the way they look.

One theory about why women are often heard saying negative things about their appearance is that we can often internalize a fear of jealousy, envy, and competition from other women. Because women are socialized to be compassionate and relationship-oriented, we tend to want to fit in and belong. In adolescence, the pressure to fit in and belong is at its peak, and the pressure to have what’s considered an “ideal” appearance often accompanies it. Along with appearance pressures generally come competition and envy.

Jealousy and envy can lead to social rejection. Hurtful experiences of either feeling terribly envious of another or being at the receiving end of someone’s envy-based rejection may be equally hurtful. These kind of bad experiences often lead to mistaken beliefs about our relationship to our bodies. In other words, we may come to internalize the belief that we can’t be both confident and accepted by our peers. Thus, the fear of social rejection creates a kind of internalized oppression: “If I feel good about my looks or value them, or if others do, will I lose my friends?”

This fear may lead women to make expressions of self-loathing in public as a way to tame the enemy, so to speak.

Another reason behind the expression of negative views about their bodies may be that for women, the body and food can become a sort of code language for emotions. It’s often the case that the emotions of women are devalued, so women may be more likely to repress misdirect, or otherwise deny their emotions. Talking about the body and food, then, can become a replacement way of coping with one’s feelings.

Since emotions tell us about our needs, coping with emotions through self-criticism may not only be unhelpful, it can develop to the point that it interferes with self-care and compromises interpersonal boundaries.

Over time, this may come to interfere with the effective identification and expression of emotions. Since emotions tell us about our needs, coping with emotions through self-criticism may not only be unhelpful, it can develop to the point that it interferes with self-care and compromises interpersonal boundaries.

Some people may also use public negative self-talk about their bodies as a misdirected attempt to get motivated to work out or eat healthier. In line with the construct of internalized criticism, some people believe if they say negative things to themselves, or about themselves to others, they will be motivated to change and thereby avoid potentially hurtful criticism from others.

Unfortunately, negative self-talk that is more in line with punishment, and the effects of this kind of talk, tend to wear out very quickly. While we are young, we may be motivated to “behave” to avoid criticism. Over time, however, the negativity loses effectiveness as a person becomes withdrawn from their goals, loses hope for ever being able to change, or begins to feel defeated. Negative consequences have also been shown to have less impact on behavioral change than positive reinforcement, so this type of negative self talk is generally counter-productive.

How Can We Overcome Body Negativity?

Overall, being overly focused on appearance, especially with regard to conforming to societal standards of beauty, can do us all harm by taking away our energy and enjoyment of other areas of life. It is simply not possible for all bodies to align with the body size and type often depicted as “ideal” (tall, slender, with a certain figure, and so on), and attempting to reach an unattainable goal may only cause distress.

It’s possible for us to overcome negative self-images, and change negative self-talk and critical messages into positive ones, by learning to enjoy our body for how it feels, what it can do, and the enjoyment it can bring us in life. If we can begin to do this, instead of primarily focusing on how we can control it, sculpt it, or pare it down, or use it to express emotions that may need attention, we are likely to be able to extend this positivity to all areas and increase our well-being overall.

What’s more, we are more likely to be able to share these positive messages with others. So next time you step up to a mirror next to another person, if the first thought that comes to mind is self-critical, ask yourself instead how you can model positive body image ideals and self-esteem. What do you love about your body? Try focusing on that instead.

If you struggle to overcome negative self-talk, overly critical thoughts, or body image concerns, please consider seeking support from a compassionate and qualified therapist or counselor.