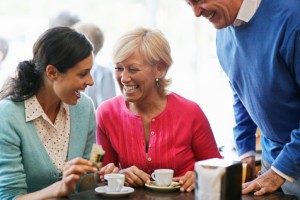 Cindy, a married young adult, is on her way to visit her parents in a different city. She is looking forward to seeing them—it’s been a while. But part of Cindy is dreading the visit. She feels a churning in her gut, anticipating her mother’s criticism and her father’s disengagement. She has spent a lot of energy keeping her parents at a distance since she left home for college. She gets so aggravated with them that at times she wonders why she bothers keeping up the relationship. And yet a combination of obligation, guilt, and a yearning that they might finally “get” her leads her to set up this visit.

As Cindy’s car gets closer to home, she starts to feel like the young girl she once was, wanting her parents’ approval, fearing their reaction, feeling powerless and angry. Why does her maturity melt away as she comes into the magnetic field of her childhood life and house? By the time Cindy arrives, she has a bit of a chip on her shoulder, and she holds back as her mom hugs her. Mom, sensing Cindy’s hesitation, feels hurt. Later, at dinner, she accuses Cindy of never visiting them, and the old painful criticism-defense cycle revs up. Cindy looks to her father for support, but he is lying low and trying to stay out of the fray. He avoids eye contact with his daughter. Cindy blows up, leaves the table, and promises to herself not to come home again for a long time.

Staying away, or taking “the geographical cure,” is one way of minimizing intergenerational hurts and disappointments. The problem with this strategy is, to paraphrase an old commercial, “You can take the girl out of her family of origin, but you can’t take the family of origin out of the girl.” Unfinished business from our past, especially in our families, often haunts us in our present relationships. Cindy carries intense sensitivity to criticism, a feeling she has always had with her mother. When her husband, Stan, is displeased or annoyed with her, Cindy becomes angry and disconnected from him. Her punitive distance can last for days. Feeling rejected, he becomes more judgmental of his wife, and the two are caught in a criticize-withdraw impasse that undermines their marriage.

What cruel poetic justice causes poor Cindy to relive the nightmare of her childhood in her marriage? Cindy is not alone. We often find ourselves replicating in our current intimate relationships the very issues that hurt us most in our past.

Cindy’s sensitivity to being criticized interferes with her ability to constructively engage with Stan about his frustrations in their relationship. Her resentment, reactivity, and blame of her mother are being replayed in her marriage. (Stan has his own issues that fuel the couple’s impasse; for simplicity’s sake, I focus here on Cindy.) Cindy’s old wounds from her family of origin are impacting her ability to engage her husband in an open, loving, constructive manner.

The amygdala, a part of our emotional brain that sets off the fight-or-flight response when we feel threatened, also holds old painful emotional memories. So when Cindy feels beleaguered by Stan’s criticism, her amygdala registers danger from the past as well as from the present interaction. It is a double whammy that makes her more reactive.

Waking from the ‘Spell of Childhood’

Cindy feels like a helpless little girl with her parents. She is waiting for them to finally give her what she needs, and she is perennially disappointed with them. She is “living under the spell of childhood.” She sees them as having all the power to make her happy or sad, and is chronically resentful at them for not being the parents she needs and wants. Cindy feels like a victim, blaming her parents for her problems. She repeats this dynamic in her marriage. When we are stuck in a blaming stance in our families of origin, we may carry that stance into other relationships. So what can Cindy do?

Rather than being victims, we can choose to reach for our best selves and become the authors of our own relational lives.

Cindy is tired of being the little girl with her parents, and wants to grow beyond the victim, blaming position in her relationships. She decides to take a step back and become curious about how her parents developed in their own lives. Thinking about how her mother grew up—mom’s parents were also very critical—helps Cindy feel less reactive and more compassionate toward her. She thinks about her father’s childhood as well, and how he learned to disengage from his own parents’ constant fighting. Cindy is beginning to see her parents as real people with their own struggles, not just as her mom and dad. As she becomes more curious and compassionate toward them, Cindy feels less like a helpless child and more like a mature adult. She is waking from the spell of childhood.

When she feels criticized by her parents or her husband, Cindy’s amygdala registers danger. She automatically protects herself by angrily withdrawing—a combination of fight and flight. This reaction is Cindy’s survival strategy, and she has been using it her whole life when she feels vulnerable. With the help of her therapist, she begins to see how her survival strategy is keeping her stuck and disempowered in her interactions with her parents and with Stan.

Starting with Stan—with whom she feels safer—Cindy says she wants to hear his concerns but needs him to present them more gently. And she experiments with telling him when she is hurt in a calmer, less reactive manner. Instead of angrily storming off and shutting him out, she negotiates a time-out so they can reconnect more constructively an hour or so later. Stan responds well, and feels protective of his wife as she shares her vulnerability. In couples therapy, both partners work to take responsibility for their parts in these moments of hurt and misunderstanding. Both are working to “grow up” their survival strategies.

With her newfound sense of connection and empowerment in her marriage, Cindy decides to experiment with dealing with her parents in a different way. She is tired of being the resentful little girl with them. She invites her mother to lunch, an invitation her mother is thrilled to accept; she has felt rejected by her daughter for years. In their meeting, Cindy is careful to frame her comments in a non-blaming way. She tells her mother she’d like them to have a better relationship, with less criticism and anger. Because she is offering this invitation in a calm, positive manner, mom does not get defensive; both agree to work to improve their relationship.

In thinking about her relationship with her father, Cindy realizes she has adopted his survival strategy of withdrawal. She feels more compassionate toward him as she thinks about his unhappy childhood. On one visit, they take a walk together and Cindy shares with him her own struggles around withdrawing when upset. They agree to a code phrase, “I need a time-out,” they can use with each other when their interaction is unproductive. And they agree to talk about it when they are calmer. With both her parents, being less caught in the resentful child mode allows Cindy to be more thoughtful and empowered in her responses.

Cindy is learning to have voice in her marriage and in her intergenerational relationships. With her growing sense of relational empowerment, Cindy no longer feels like a victim. She is finding ways to communicate her wishes and concerns in these key relationships without resorting to blame. Her husband and parents, feeling less attacked, are more open to her concerns. When moments of hurt or disconnection occur—and they will, even in the best of relationships—there is a commitment to repair and mutual respect between Cindy and Stan, and between Cindy and her parents.

Not all parents are as receptive as Cindy’s. And not all partners would respond as well as Stan to an invitation to change. Furthermore, some family or couple relationships are abusive or dangerous; in these circumstances, separation or distance may be necessary for safety.

But for most of us, a shift to a more empowered, less blaming position can have amazing consequences in our close relationships. If I get reactive with my husband and unleash an amygdala-driven blame statement, he is likely to get defensive or angry, as we get caught up in a “dance of amygdalas.” But when I present my concerns calmly and respectfully, speaking from my higher brain, he is more likely to relax and be open to my concerns.

In our relationships with our families of origin and with our partners, we do have a choice. Rather than being victims, we can choose to reach for our best selves and become the authors of our own relational lives.

Note: Cindy and her story are fictional, offered to illustrate transformation in intergenerational relationships.