December 8, 2014 • By A GoodTherapy.org Announcement 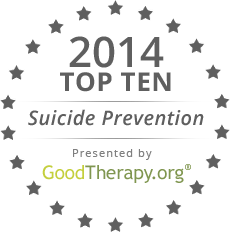 Every time a person commits suicide, at least six other people are estimated to be intimately affected by the loss. Suicide is the 10th-leading cause of death in the United States, with approximately 40,000 people dying by suicide each year. Non-fatal self-harm injuries account for roughly 500,000 visits to hospitals each year. Millions of people are affected by these acts, and loved ones and survivors may experience anguish, grief, frustration, and other complex emotions after a suicide, attempted suicide, or self-harm event.

Substance abuse and mental health issues, particularly depression, are some of the largest risk factors for suicidal ideation, and adequate mental health care is one of the strongest protective factors that may keep a person from resorting to suicide. Age appears to play a part as well, because suicide rates are significantly higher than the national average of 12.6% among adults between the ages of 45 and 64 (19.9%), and for those 85 and older (17%). For younger populations, suicide is a leading cause of death: It’s the second-leading cause among adults between the ages of 25 and 44, and the third-leading cause for people between 15 and 24 years of age.

Suicide is preventable, though. Recognizing warning signs, eliminating stigma, and talking with loved ones or finding professional help for those who may be having suicidal thoughts are the most important steps we can take to save lives.

There are a number of organizations working to educate the public about suicide, provide resources to suicide survivors, and prevent people from taking their own lives. We’ve compiled a list of the 10 best online resources for suicide prevention—GoodTherapy.org excluded—in 2014. Our selections are based on quality and depth of content, presentation, and functionality.