Believing You Can Grow Helps You Grow 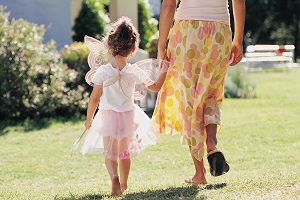 There are few children’s stories more thrilling for the fairyphile than J.M. Barrie’s Peter Pan. Despite fairy-dusted flights, hair-raising adventures, and swashbuckling brawls, the Pan moment that most stuck with me through the years was a quieter one: just after Hook attempted to poison a sleeping Peter.

To stop him from drinking a cup she knew was poison, Tinkerbell swooped in and attempted to martyr herself on Peter’s behalf. With her dying breath Tinkerbell told Peter she’d get well if only she knew that children believed in fairies. So Peter, in one of his more chivalrous moments, called upon all the sleeping children in the world to clap their hands if they believed. Applause from around the globe reached Tinkerbell’s charmed ears in Neverland, and within seconds she was back to her sparkling self. All it took for her to recover was proof that people believed in her.

What if, every time we doubted ourselves, all it took was belief to bring us back from the deathbed of our ambition? According to Dr. Carol Dweck, a leading expert in the field of positive psychology, this type of magic exists outside of Neverland. In fact, this relationship between belief and ability, between perception of self and achievement, is called a “mindset.”

In one of the most dramatic studies conducted on mindsets, several hundred students entering the seventh grade were divided into two groups. Both groups were given basic study tools — advice collected from long-time, high-achieving educators. Yet students in one group were also instructed that their brains were like muscles, that intelligence was malleable, and that every time they learned something new their brains were forming new connections. They were taught, in essence, that every time they studied it was as if their brain were going to the gym.

And it worked. At the end of the semester, the students who had been taught that their brains had the potential to grow had significantly higher math grades than the group who had just been given the study tools.

Why does one’s mindset have such an impact on behavior? Imagine a dirty beach full of trash and remnants from last season’s revelry. Now picture a pristine one, sand as white as snow for as far as the eye can see. You’re more likely to (accidentally, of course) litter on the dirty beach, right? It becomes a self-fulfilling prophecy.

The same works with our mindsets. If we believe that we must be born intelligent and talented to ever be intelligent and talented, we always have a built-in excuse to not try — and this means we’re less likely to succeed. Studies have shown that people with fixed mindsets are less likely to accept challenges, embrace risk, or take chances. Because success is so closely linked to innate traits, it’s impossible to not take failure personally.

Conversely, a growth mindset embraces failure as an opportunity, as a stepping-stone to the next level or to the next lesson. If we believe that we can learn to be smarter and more talented, we’re more likely to work harder, to keep trying, and not to be deterred by failure. It’s not that people with a growth mindset aren’t disappointed when things don’t work out, or that they don’t need people’s approval. It’s just that with a growth mindset a person has a tendency to be persistent, which inevitably leads to eventual success. A growth mindset in and of itself won’t make a person happy, per se, but it makes achieving something that could lead to happiness more likely.

It’s not surprising that the fixed mindset is so prevalent. From a young age, we’re bombarded with evidence that life is a competition, that it’s not ok to just come out mediocre, but to be the best. Effort isn’t often put on the same pedestal as achievement. How often do we congratulate or reward ourselves for completing a college application? For showing up to a job interview? No — the real celebration is only after we get into college, after we get the job. The result is undue weight placed on the outcome instead of the progress, reinforcing a fixed mindset.

Luckily, as seen with the seventh-graders, a fixed mindset can become a growth mindset relatively easily. The mere belief that you have the ability to learn or achieve something does, in fact, make you more disposed to learning or achieving it. You don’t need Tinkerbell to wave a wand. Be your own band of applauding children and see just how shiny you can be.