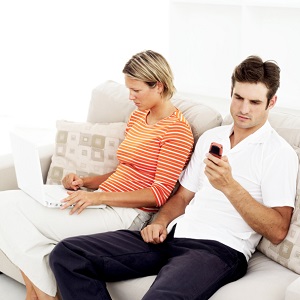 We’ve all heard how social networking sites can be harmful to relationships. You check your account and find out that your love interest has not responded to your message. Before you post another message, you notice a pop-up for hot, available singles in your area. One of them looks like your old flame. So out of sheer curiosity, you Google them, only to find he or she is going through a nasty divorce and are looking to date again. And so it begins.

A new study conducted by Dr. Bernie Hogan of the Oxford Internet Institute has found that social media can not only damage relationships when used for infidelity, but also when used as communication between two committed partners. You wouldn’t normally think that a flirty text, a cute emoticon in an instant message, or a romantic post to your spouse’s Facebook page could be bad for the relationship. Hogan surveyed over 3,000 couples and found that those who used more than five forms of media communication to stay in contact with their partners had lower levels of relationship satisfaction than those who kept it simple. And they weren’t just a little less satisfied; they were 14% less satisfied.

Hogan says it’s not about which outlets are used. It’s about the motivation for using them. “Using these media is great in moderation,” says Hogan. “But more is not necessarily better.” We may feel pressured to send texts, post messages, or IM as a way to compensate for not spending enough actual time with our partners. Letting our spouses know we are thinking of them through a sweet message is a good thing. Doing it because we can’t put down our gadgets long enough to hold their hands and look in their eyes is a bad thing. So remember, social media can provide great ways to stay in touch with those you love. But it should never be the only way.