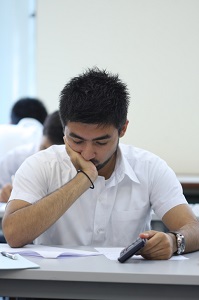 Standardized testing is a huge industry, with dozens of test preparation companies offering tutoring, group classes, and hundreds of books designed to help students perform well on the SAT, ACT, and high school graduation exams. High school students have labored under testing pressure for as long as there have been high schools, but there is mounting evidence that standardized admissions tests may not be the best measures of a student’s intelligence or potential college success.

In 2012, the College Board changed testing standards for the SAT by requiring that students attach a photo to their tests. The decision was met with outrage from organizations advocating for fair testing, and has renewed concerns about the validity of college admissions tests.

There is a direct correlation between socioeconomic status and standardized test scores. Students whose parents have higher incomes tend to have higher test scores, while students from low-income families tend to underperform. Given that low-income families have fewer resources and may not be able to afford tutoring or test-preparation classes, this is unsurprising. Because standardized tests tend to be treated as representations of a student’s innate ability, however, low-income students are at a marked disadvantage, and their test scores may convey little about their intelligence.

Because stereotypes are so prevalent, minority groups don’t need to be reminded of them. A simple reminder of their membership in a minority group is enough to activate stereotype threat. Almost all standardized tests ask students about their sex and ethnicity, which may activate stereotype threat and explain, in part, the underperformance of minority groups. The SAT’s new requirement that students submit a photo has raised concerns that a student’s ethnicity and sex will become even more salient, further undermining the performance of minorities.

Although standardized tests are supposed to test basic skills all students learn in school, they can end up inadvertently putting some at a disadvantage. For example, a word problem about a cruise to Alaska might seem innocuous. But to a child who has never been on a cruise or who does not know what a cruise is, the wording can be confusing, making it challenging to answer a problem the test-taker might otherwise easily answer.

Occasionally, overt bias makes its way into a test. In a 2007 New York state high school graduation test, students read a 1922 passage outlining efforts to “teach the native races.” One question about the passage asked, “What are two ways the British improved the lives of Africans?” For racial minorities, these sorts of questions can be extremely hurtful, offensive, and off-putting, undermining their ability to perform well on tests.

Colleges are increasingly recognizing that standardized tests aren’t the only way to measure intelligence and potential. About 800 schools—many of them high-ranking universities—are willing to admit students without SAT or ACT scores, choosing to focus on grades, recommendations, essays, and life experience instead.