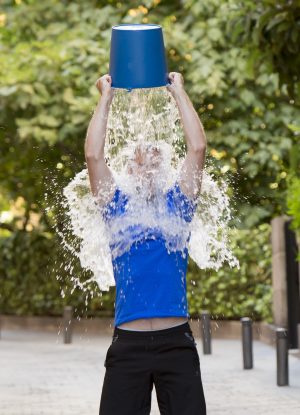 In 2014, videos of people dumping buckets of ice water on their heads flooded social media. The purpose of the ALS ice bucket challenge was to draw awareness and funding for amyotrophic lateral sclerosis (ALS). Known sometimes as Lou Gehrig’s Disease, ALS is a progressive neurodegenerative condition that produces dysfunction in the spinal cord and muscles through nerve death in the brain. People with ALS steadily lose control over their bodies. This progressive deterioration can spark mental health challenges such as depression and anxiety. There is no cure for ALS.

Now, researchers are crediting the ice bucket challenge with raising funds that produced a groundbreaking genetic discovery in the fight against ALS. According to a study published in the journal Nature Genetics, a gene known as NEK1 is one of the most common genetic contributors to ALS. This discovery could potentially lead researchers to new treatment options for people who have the condition.

People who eventually developed ALS were more likely to carry mutations in a gene known as NEK1, whether or not they had a family history of the disease. This suggests NEK1 mutations are a major risk factor for developing ALS, even in people who have no family history.

Mutations in NEK1 can produce a number of changes in the body that are linked to ALS, including DNA damage and changes in neuron structure. The finding has not produced new treatments for ALS yet, though it could eventually be used to identify people at risk for ALS.

The ice bucket challenge raised more than $200 million for ALS research—an unprecedented amount of funding to fight the disease. The ALS Association received more than $115 million to go toward further research, treatment options, and improvements in quality of life for people with the condition.