Air Pollution May Be Factor in Dementia in Older Women 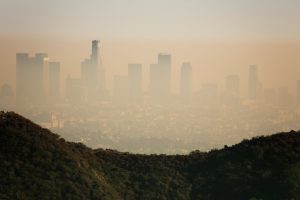 Air pollution from power plants and cars can significantly increase older women’s vulnerability to dementia, according to a study published in the journal Translational Psychiatry. The study looked at correlations between exposure to air pollution and dementia, then used a mouse model to test the effects of pollution on the brain.

Researchers determined tiny air pollution particles interacted with a genetic variation to increase the risk of dementia, including Alzheimer’s. Previous studies have found a link between lifestyle or environment and dementia. One study found a sedentary lifestyle could increase the risk of Alzheimer’s as much as a genetic variant. Another study linked a number of modifiable risk factors—including high body mass index (BMI), depression, coronary artery disease, and low educational achievement—to the later development of Alzheimer’s.

Can Air Pollution Cause Alzheimer’s?

The study analyzed data from 3,647 senior women who participated in the Women’s Health Initiative Memory Study. Participants lived in 48 states, did not have dementia, and ranged in age from 65-79 when the study began.

Even after adjusting for factors such as geographic location, ethnicity, health, and socioeconomic status, women who lived in high pollution areas were 81% more likely to experience global cognitive decline and 92% more likely to develop dementia.

Researchers then tested the link between pollution and dementia in a mouse model. They exposed female carriers of the genetic variation, which increases the risk of dementia, to nano-sized air pollution for 15 weeks. Power plants and cars are the primary source of this type of pollution. Mice with the genetic variant who were exposed to pollution accumulated 60% more amyloid plaques in their brains. Previous research show these plaques are linked to Alzheimer’s.

This suggests air pollution may interact with a genetic predisposition to dementia, thereby increasing the risk of developing the condition. The study’s authors emphasize the need for more research to confirm the link between dementia and pollution, and to assess whether the effects extend to men and younger people.